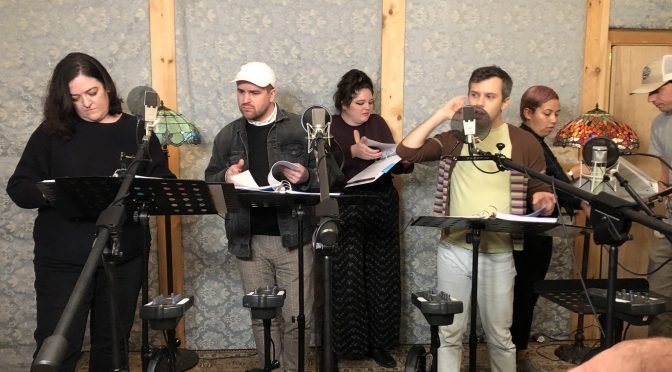 It’s been almost half a century since the National Lampoon Radio show introduced us to talents like John Belushi, Gilda Radner and Bill Murray – and now it is returning, in podcast form, to showcase new talent and special guests like Amy Sedaris and Rachel Dratch.

IT’S TIME FOR A GOOD LAUGH…AGAIN!

New York, November 12, 2019 – When National Lampoon first released the ‘National Lampoon Radio Hour’ in 1973, it broke ground in audio sketch and introduced a cast of fresh young talent that lit the world on fire: John Belushi, Chevy Chase, Bill Murray, Gilda Radner, Harold Ramis, and many more. Today it was announced that the iconic comedy franchise that took American pop culture for a wild and laugh out loud ride will return almost half a century later on Thursday, December 19!

The new, 11-episode podcast, in partnership with Forever Dog Podcast Network and available on iTunes, Spotify and other podcasting platforms (subscribe now!), will feature a collection of hilarious National Lampoon comedy sketches, characters, music and more, who will find their funny through the prose of lead writers Cole Escola (Emmy-nominated At Home with Amy Sedaris, Difficult People) and Jo Firestone (Adult Swim, The Tonight Show).

National Lampoon will celebrate its 50th anniversary in 2020, and ‘National Lampoon Radio Hour’ is at the heart of the renowned brand’s legacy. Bringing humor, satire and irreverence to this scripted refresh are some of the industry’s emerging comics whose stars are on the rise.  They include: Brett Davis (Andy Kaufman Comedy winner, Podcast For Laundry), Alex English (The Rundown, Night Train), Maeve Higgins (Maeve in America: Immigration IRL, 2 Dope Queens), Aaron Jackson (UCB, The Opposition), Rachel Pegram (The Week Of, Don’t Think Twice), Lorelei Ramirez (Comedy Central: Up Next, Pervert Everything), Meg Stalter (Vulture: Up-and-coming Comedian of the Week, The Meg Stalter Show) and Martin Urbano (Jimmy Kimmel, Comedy Central). Joining the ensemble in guest starring roles throughout the run are some of today’s biggest names in sketch comedy, Rachel Dratch, Amy Sedaris, Chris Gethard, Julie Klausner and Jordan Klepper.

In addition to the podcast, which like its zeitgeist predecessor brings storytelling to your ears, the new ‘National Lampoon Radio Hour’ also pulls back the curtain and invites fans into the studio. For the first-time ever, cameras captured the performances and antics of the dynamic comedians while taping. Each episode will be available via www.nationallampoon.com and YouTube.