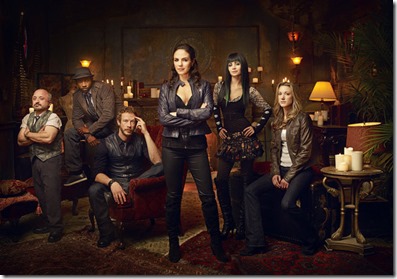 In conjunction with tonight’s season three finale of Lost Girl (10/9C), Syfy is releasing Lost Girl: The Game – a free mobile gaming app built around an original storyline by the show’s writers. It will feature an ‘interactive, mission-based experience inspired by the popular Syfy original series.

SYFY WILL LAUNCH ITS FIRST EVER MOBILE GAME WITH LOST GIRL: THE GAME

AVAILABLE ON IOS AND ANDROID DEVICES BEGINNING MONDAY, APRIL 22 IN CONJUNCTION WITH

Lost Girl: The Game will launch together with the Season 3 finale of the series, which concludes on Syfy Monday, April 22 at 10PM (ET/PT).

Featuring an original storyline, written by the series’ writers, the game invites fans to create a customized Fae character that they can use to venture through exciting new mysteries set in the virtual world of Lost Girl. Users can get a taste of the world of the Fae by creating their own avatars, embarking on missions and uncovering hidden objects, in order to score points and unlock levels.

“Fans of Syfy’s Lost Girl will have a new platform to explore the Lost Girl world,” said Jeff Li, Vice President, Syfy Ventures. “Our Lost Girl fans are clamoring for new ways to engage with the hit series.  We are thrilled to work with our media partners at Shaw Media and Prodigy Pictures to bring Lost Girl to new platforms.”

Lost Girl: The Game was developed by Complex Games.

Lost Girl will return for a fourth season on Syfy in 2014 with 13 all-new episodes. During its third season, Lost Girl is the #2 original cable drama in Adults 18-49 in its time period, averaging 1.3 million total viewers based on most current data.

Lost Girl was developed by Prodigy Pictures, in association with Shaw Media and Showcase. Executive producers are Jay Firestone and Emily Andras. Vanessa Piazza is producer. Produced by Wendy Grean. Lost Girl is produced with the participation of the Canadian Media Fund created by the Government of Canada and the Canadian cable industry, and with the assistance of the Canadian Film or Video Production Tax Credit and the Ontario Film and Television Tax Credit Program.