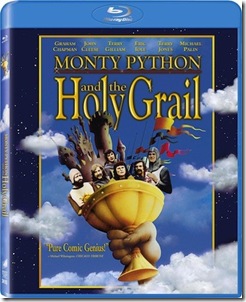 Maybe no one ever listens to Tim, but you can see him get snubbed in glorious high definition when Sony Pictures Home Entertainment releases Monty Python and the Holy Grail on Blu-ray on March 6th.

Considered the renowned comedy troupe’s finest work, Monty Python and the Holy Grail gives the Arthurian saga an absurdist twist and more famous lines than almost any other film. Since ‘you have to know these things when you’re a king,’ check out the press release for details on the package’s impressive list of features following the jump.

MONTY PYTHON AND THE HOLY GRAIL

Loaded with Over 30 Minutes of

TORONTO, ON. (January 27, 2012) – From the fertile minds of the 20th Century’s most brilliant and outrageous comedy troupe comes their most highly regarded comedy classic – Monty Python and the Holy Grail – debuting on Blu-ray™ March 6th from Sony Pictures Home Entertainment Canada. Their second feature film stars Graham Chapman, John Cleese, Eric Idle, Terry Gilliam, Terry Jones, and Michael Palin as we follow King Arthur and his knights in their search for the Holy Grail. Encounter the Black Knight, the Killer Rabbit, The Knights Who Say ‘Ni’! and the Black Beast of Aaaargh! The Blu-ray set is brimming with coconuts, shrubberies and swallows (African or European), OOPS, we mean loads of bonus materials, including over thirty minutes of new Blu-ray exclusive special features. This medieval madness will be available on Blu-ray for $19.99 SRP.

Also debuting on March 6 is the first Monty Python interactive iTunes app. “The Holy Book of Days” is a rich companion to the film, letting fans explore each of the 28 days of the filming of the movie through outtakes, diaries, audio recordings, scripts, and scores of stills. New illustrations, animations, and the story of the filming in the Pythons’ own words make each day of the Holy Grail come alive. The app offers a second screen experience too, letting users control and navigate the Blu-ray™ from the iPad. “The Holy Book of Days” will be available for $4.99 in the App Store. For a limited time, Sony is offering a $5 mail-in rebate when consumers purchase both the Blu-ray and iTunes app.

– The Film re-mastered to high definition standards never before seen

– Lego Knights: The Knights of the Round Table in Lego

– How To Use Your Coconuts (an educational film)

Monty Python and the Holy Grail has a running time of 98 minutes and is rated PG.