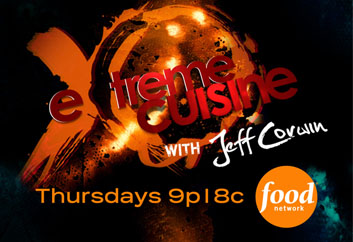 Wildlife and conservationist Jeff Corwin takes on the Food Network with his new series Extreme Cuisine! This passionate foodie travels the world from Thailand to Peru with a few stops right here in the U.S. exploring the exotic dishes each locale has to offer. Jeff is definitely a braver person than I with his open mind and adventurous spirit! First stop is Greece. I hope you’ll join him on this wild ride around the globe.

I had a chance to sit and talk with Jeff about the new show. He’s funny and a true conservationist who cares about the people of this planet and the mark that we make while we’re here. Extreme Cuisine with Jeff Corwin airs Thursday’s at 9pm EST on the Food Network.

EclipseMagazine: Jeff why don’t we start with a rundown of what exactly Extreme Cuisine is all about.

Jeff Corwin: The series is called Extreme Cuisine and I guess if I was going to try and encapsulate what the mission is, it’s really a journey of adventure where we are traveling around the world and we are looking at the relationship that people have with food and we’re really trying to get into the dish itself into the cultural experience and try to better understand how food is so often really the glue that binds a community, celebrates a culture brings forward the history of the people that we’re visiting in that community. I guess my own personal mission is to see how people around the world have found ways how to eat sustainably to be able to get themselves a meal in a way that’s maybe a little kinder to the planet and to look at the role that we have with our natural resources. I think that’s my personal mission. I wouldn’t necessarily say that we are shoving that down the viewer’s throat but ultimately I think it’s a fun, exciting journey that will hopefully make people in my community in my culture rethink about food.

What really inspired me was speaking to one of my daughters friends and we were having a conversation she was talking to my daughter because my daughter was traveling with me on the road and my daughter was trying to explain this meal that we had, I think it was snails and we had them in Greece, and her friend was like “where do you keep them in your refrigerator?” and I’m like “what do you mean where do we keep them in our refrigerator?” and she said “well food comes from the refrigerator”. I said, “Where does it come from before it goes to the refrigerator?” and she goes “well, then it comes from the super market”. I’m like that’s interesting and I want people to sort of get out of their refrigerator and not think about a super market and maybe think about a family that lives in the mountains of Peru at 13,000 feet. Not only do they not have refrigeration, they don’t even have electricity. So that’s what we’re looking at. I want to have these experiences, approach these journeys as a biologist as an anthropologist and as someone who has a great passion for food.

EM: So you have a documentary coming out toward the end of the year, is that correct?

JC: Yes it’s called 100 Heart Beats and its based on a book that comes out at the end of October. It’s about species that have been pushed to the brink and heroes of conservation trying to save them. 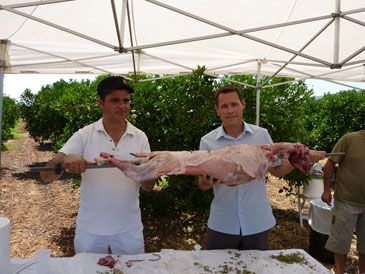 EM: How did the documentary come about? Was it just because of the book or was there something else that spurred that?

JC: It was a book that I had been working on for quite a while and you know we live in these very uncertain times when it comes to species conservation and we are witnessing species disappear right before our eyes. There are species that I have filmed that no longer exist as life forms on the planet today. That was the catalyst behind the book but I also didn’t want to do it as a glass is half empty approach I want to do it in a way to show there are people that have dedicated their careers and put their families on hold sometimes your own security to protect these species so I wanted to tell those stories. MSNBC and NBC took an interest in this and then they turned the book…I’m basically revisiting those stories through the documentary highlight in the book.

EM: What would you say are some of the dishes that have surprised you that you’ve come across that you never thought that you would like; something that had completely taken you by surprise?

JC: I think what has really surprised me is it’s not necessarily a specific dish. I hardwired myself when we began that I was not going to go in here…it was not my place to bring my cultural prejudices’ to the dinner table or the kitchen. So I was going to approach this with a totally open mind. I have my own personal filter to make sure there are ethical issues, sustainable, renewable issues with the food that we eat. But other than that I was gonna have an open mind.

I have been incredibly surprised that most of the foods we have eaten have been delicious. I think what has really surprised me though is there are foods that were pitched to me that I at first said no I don’t wanna do that, I don’t wanna think up eight minutes to do a story on potato or we were just in Louisiana and we had this whole thing on collecting wild rice and I’m like who gives a kook about eating wild rice you know, they’re gonna just turn the station.  They’re like Jeff just take a look at the story it’s not what you think. You go out in these old canoes and you do it the way the indigenous people did it 1000 years ago. I am so glad I did because this story of wild rice and how you get wild rice is amazing to actually go out there and harvest wild rice in Louisiana or to go out there and spend the day with this family that lived in the mountains of the Andes and harvest potatoes and cook them with the peanuts and cooking in this smokey earth oven. You feel like you’ve time traveled back. It was one of my favorite memories from Peru. All the dishes are good because you know people eat good food.