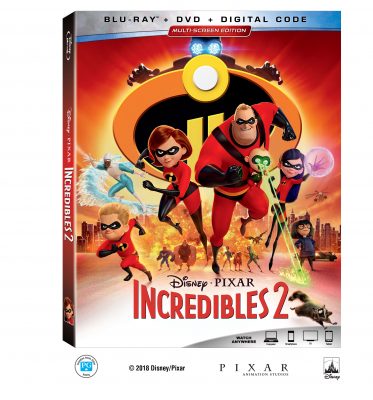 The Incredibles spring into action, attempting to stop The Underminer’s wanton destruction of the city, an ancillary effect of his crime. While the family is mostly successful, plenty of people in high places lament the damage the superheroes continue rack up on their watch and consequently, their parachute support (day jobs, relocation services), gets yanked.

With internal tensions rising about their situation, the Incredibles struggle to figure out how to live as supers in a world where doing what they do best—hero work—is illegal. Violet’s would-be date – who saw her in costume but sans mask – has had his memory wiped, Dash is wrestling with how to learn “new” math, the parents are without work, and on top of all that, the whole family is forced to cram into a motel room while they figure things out.

Coming to the rescue are Winston Deavor (Bob Odenkirk) and his sister Evelyn (Catherine Keener) with an idea to make supers legal again—put Elastigirl into the spotlight and let the world see transparently all the good she does for society. Mr. Incredible agrees, rather begrudgingly, to take over domestic responsibilities, and Elastigirl begins her new adventure as the face of superheroes including tracking down a mysterious threat known as The Screenslaver.

What works in Incredibles 2 are the majority of the characters, and the action. Hunter continues to bring Helen to life in a fantastic way and gives her even more depth in the sequel. Throughout the film Elastigirl struggles with what is truly right as she balances conflicting arguments between the current law and what is “best” for the general public. She has some especially great interactions with the portal-powered Voyd (Sophia Bush) and Keener’s character talking about the role of a woman, super or not, in today’s society. Those moments are where writer/director Brad Bird is at his best.

Other familiar secondary characters have more screen time, but very little to do with the narrative. Instead, Bird uses Frozone (Samuel L. Jackson) and Jack Jack as comic relief, and they work in these roles remarkably well. Jack Jack in particular has many sequences where the physical humor he creates is laugh-out-loud funny. Even fan-favorite Edna Mode (Brad Bird) is back, and still a stitch.

The action is very well-choreographed, and while there is no sequence that rivals the last third of the previous film when the family finally assembles, Bird orchestrates some moments that will leave audiences wide-eyed and gasping. A motorcycle sequence featuring Elastigirl chasing a monorail is particularly exciting, especially once the features of the vehicle are revealed. Bird also introduces a whole new set of superheroes with rather unique abilities which keeps the action fresh and exciting.

While Incredibles 2 has some great character and wow-worthy action moments, it suffers a bit from some antiquated familial tropes and a lack of grandeur that elevated the first film. Bob Parr, to start, is a crappy husband. He’s resentful that he’s not the new face of superheroes, and so cocksure that he could do a better job, that you wish Dash would super-speed slap him across the face a few times to knock some anti-misogynistic sense into him.

This is balanced by Bob’s realization that Helen had a much more difficult workload in being a superhero and a parent.

The whole “ha, look at the man trying to be a stay-at-home parent!” shtick that got old after 1983 is fortunately not super prominent, but the stale paradigm still lingers with plenty of awkward father/child miscommunication and misunderstandings that makes the Incredibles family feel more broken than unified.

Fortunately, it’s given just enough of a unique spin (Bob works hard to be able to help his kids – scenes that have a genuine warmth to them) that we can forgive the ancient tropes because Bob really is a good dad.

The fun in the first film was watching the core four get to know and understand each other in terms of their powers, so this approach – Bob getting to know his kids as his kids – works.

With sequels people expect bigger and better, and Incredibles 2 simply isn’t quite either of those things. It’s funnier, but in terms of epic-ness, it falls slightly short of its predecessor. In an era where audiences have been getting three or four superhero movies a year for the past six to seven years, it is admittedly difficult to do something fresh. So instead, Incredibles 2 tried to do something fun, an understandable strategy that pays off.

The Incredibles 2 Blu-ray release is a very enjoyable ride for the entire family – and a chance for me to upgrade my grading (the film is better than I originally thought – so yay! Blu-ray!).