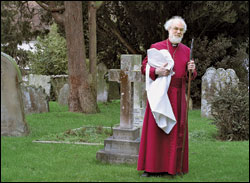 This evening CBS presents a unique documentary, In God’s Name [ 9/8C], in which twelve of the most influential spiritual leaders in the world talk about the most pressing questions of our time and discuss how and why they have been able to deal with some of the most of the most devastating events in recent history.

“People of all faiths and of all homelands are divided into reasonable and unreasonable people, and all I wish – and pray to God for – is that reasonable people will outnumber the fools.” – Imam Muhammad Sayyed Tantawi, Grand Sheik of Al-Azhar and a prominent Sunni Muslim leader.

Jules Naudet was in the World trade Center, shooting a documentary about New York firefighters when the south Tower fell in one of the most horrific terrorist acts in history. His brother, Gedeon, was afraid that he’d never see him again – and when they were reunited, they realized that they spent their time apart wondering the same things: who am I, why am I here, why is there such evil in the world.

At that time, they determined to seek out world spiritual leaders and find out what they believed. In God’s Name is the result of their travels to spend a day with, and interview, a dozen of those leaders. It is the first time that these twelve spiritual people have been filmed in this context – and the first time that we will see them espouse their beliefs in the same program. 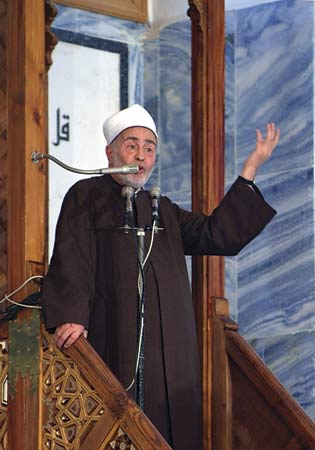 The one belief that is common to all twelve people is that there is no religion that sanctions violence and killing for any reason other defence of self, country or faith. There is further, no sanction for the killing of innocents under any circumstances. Every single one of the twelve denounced acts of terrorism, such as the 9/11 attacks.

What makes these declarations important is that we not only hear them from such influential leaders, but that we are given some insight into the backgrounds of these people: how they were called to lead; the sacrifices they’ve had to make to lead, and some of the ways in which their faith has been tested.

Between them, the twelve are spiritual leaders to something like four billion people!  There are various Christian sects, a Hindu leader, the Dalai Lama, the High Priest of Shintoism, the chief Rabbi of Israel, both Sunni and Shiite Muslims and the Sikhs’ highest authority. 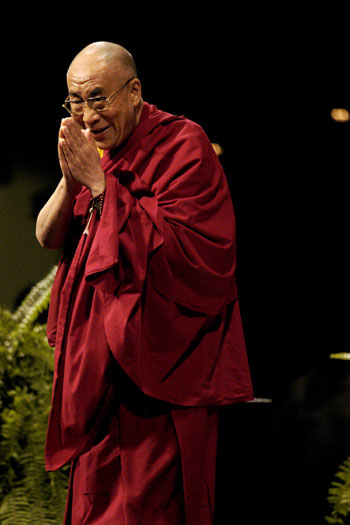 The Naudet brothers have done a marvellous job of showing us the daily lives of the twelve. We see Amma [Sri Mata Amritanandmayi], the Hindu spiritual leader known as The Hugging Saint, who spends her days hugging and comforting the people who seek her out; Joginder Singh Vedanti, Jathedar Sri Akal Takht, the Sikh leader, who lives in two small rooms with his wife and daughter; the Dalai Lama, who lives in exile from the Communist China run Tibet, who espouses his appreciation of all faiths, and so forth.

This candid and forthright documentary shows that all of these people have so much more in common than their differences that there should be a way for the reasonable people to indeed outnumber the fools. In the end, In God’s Name is both an indictment of those fanatics who pervert religion to kill, and a call for all the peoples of the world to unite – and share the core messages of their faiths at the most basic levels – in the hope that we can change things for the better.

Jules and Gedeon Naudet have clearly touched the hearts of these twelve spiritual leaders. They have been given unique access to all twelve and put together a film that speaks to us in positive terms, despite the evils of the world around us. It is a once in a lifetime achievement.

One thought on “IN GOD’S NAME: Twelve of the World’s Most Influential Spiritual Leaders Address Some of the Most Profound and Challenging Questions of Our Time!”