Lake Bell wrote, directed, produced and stars in In A World… – a very personal but completely accessible movie about a woman who faces the glass ceiling of the movie trailer narration biz while surviving as a vocal coach to actors like Eva Longoria. What makes her struggle more intense and funnier, is the fact that her father is the king of trailers.

Carol Solomon (Bell, Childrens Hospital, Making It In America) gets kicked out of her father’s apartment so his girlfriend, Jamie (Alexandra Holden, Rizzoli & Isles, Franklin & Bash) – who is a year younger than Carol – can movie in. So she unceremoniously barges into the apartment and life of her sister, Dani (Michaela Watkins, Enlightened, New Adventures of Old Christine)) and her husband, Moe (Rob Corddry, Childrens Hospital, The Way Way Back) – who has never been better. There’s a scene where Moe thinks Dani has cheated on him that is just amazing.

Carol works as a vocal coach, but she’s a bit of an underachiever. We see her expertise when her dad, Sam Soto (Fred Melamed, A Serious Man) persuades her to do her Russian Star Wars (must be seen to be appreciated) and when she has to coach Eva Longoria through a Cockney accent. When she’s not working, she’s trying to get new accents on tape – she’s thinks she’s being unobtrusive – leading to some of the movie’s biggest laughs.

Complications arise on two fronts: Dani works as a concierge in a posh hotel and when an Irish client hits on her, Carol decides she needs to get his accent on tape (her Irish accent is weak); at work, Carol records a temp track for a children’s project and gets the gig, and a few more – leading to consideration for a potentially huge score: narrating the trailer for a Hunger Games-type quadrilogy called The Amazon Games! In this case, the complication arises from the fact that her father, who had been looking at retirement, learns she’s up for it and decides to go after it, himself. 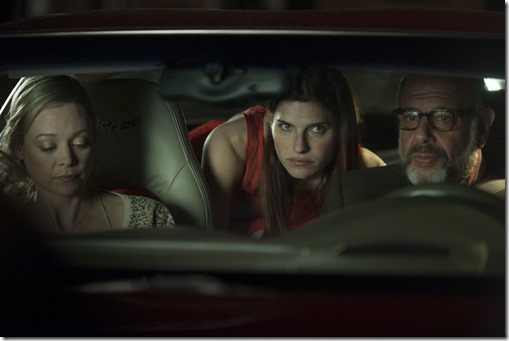 Then there’s Gustave (Ken Marino, Burning Love, Axe Cop), her father’s protégé – who thought he was getting the children’s project Carol got – and wants the gig for The Amazon Games, which is resurrecting the legendary Don LaFontaine’s ‘In a world…’ phrase – the Holy Grail for trailer narrators (in a nice touch, the opening credits roll over an interview with LaFontaine). Plus, he and Carol had a moment – which presents an emotional problem for Louis (Demitri Martin, Important things with Demitri Martin), the recording engineer with whom she frequently works.

Coming as the blockbuster season winds down, In A World… is a refreshing break. It’s a low-budget film featuring mostly friends of Bell’s (whom she could not have afforded otherwise) and makes use of minimal sets to great effect. It tackles issues – like the sexism/misogyny in the voiceover/trailer industry – and builds around themes like the importance of family and the struggle for success (whatever you might conceive that to be).

She makes a point about the way voices in trailer narration do not reflect the multitude of voices in the real world – but does it within the boundaries of a terrific story, and not on top of one – and shows that success is not always what you might think it is, or be quite what you’re expecting.

The dialogue is bright and Bell makes use of aspects of the unique world of trailer narration (a montage of Sam, Carol and Gustave preparing is hilarious – and pretty much true – to create a very specific world in which we find very recognizable characters. Generally, she keeps things moving, though at times the pacing seems a bit more random than she might have been aiming for.

Through it all, Bell turns in a finely honed performance that captures Carol’s desires and ambitions as well as her frustrations – both personally and professionally.

Overall, though, In A World… is an assured film (let along first film) from a writer-director who has a unique voice and can Say Stuff without being overt about it. I can’t wait to see what she does next!