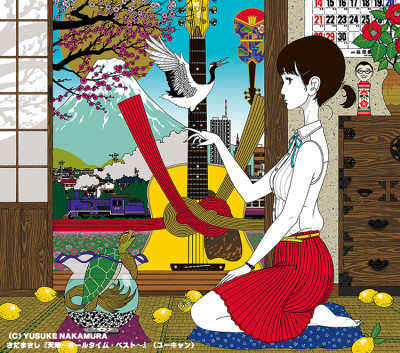 Renowned contemporary pop artist Yusuke Nakamura – designer of album covers for Asian Kung Fu Generation as well as book covers for Tokuya Higashigawa’s Solve the Mystery after the Dinner and Tomihiko Morimi’s The Tatami Galaxy and Yoru ha Mijikashi Arukeyo Otome – has been named a Guest of Honor for the 2015 J-Pop Festival. The festival will take place on Saturday, August 8th and Sunday August 9th at the historic Fort Mason Center in San Francisco’s Marina district.

Yusuke Nakamura is one of Japan’s foremost illustrators and graphic artists and is renowned for bold, colorful designs that combine a provocative mix of Japanese pop culture and traditional influences and themes.

During J-POP SUMMIT, Nakamura will appear at Kinokuniya’s booth located inside the Fort Mason Festival Pavilion both on Saturday, August 8th and Sunday August 9th to meet fans and attendees and to autograph purchased copies of his illustration books, which will be offered for sale throughout the weekend. Autograph times will be posted on the J-POP SUMMIT website in coming days. 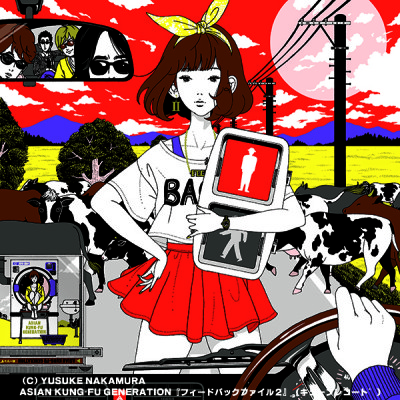 “Yusuke Nakamura is an artist of tremendous acclaim across Japan where his vibrant and instantly recognizable work has been featured on top selling album covers and novels and even in music and high school textbooks,” says Takeshi Yoshida, Executive Producer of the J-POP SUMMIT. “Showcasing some of the most popular and creative visual artists and illustrators from Japan has always been a favorite with J-POP SUMMIT attendees and we invite fans to get ready for a fresh new sampling of fun Japanese pop culture at this year’s festival!”

Yusuke Nakamura was born in 1978 and drew acclaim for his designs for the CD design of the Japanese alternative rock band, ASIAN JUNG-FU GENERATION, and also for book covers for bestselling novels including author Tokuya?Higashigawa’s Solve the Mystery after the Dinner and Tomihiko Morimi’s The Tatami Galaxy and Yoru ha Mijikashi Arukeyo Otome. Nakamura’s first illustration book, Blue, was published in Japan in 2009 and has sold nearly 100,000 copies. In 2014 he published two additional illustration books, Kirara-chan and NOW. Yusuke Nakamura is also a musician and member of the band, SAILS, and he is also a published essayist. Additional information available on artist official website http://www.yusukenakamura.net; official Facebook: www.facebook.com/yusukenakamura.jp.

Passes for 2015 J-POP SUMMIT are available at:

J-POP SUMMIT V.I.P Passes include: A ticket to the Opening Special Premiere Event at The Castro Theatre on Friday, 8/7; a Weekend Pass to Fort Mason Center for Saturday, 8/8 & Sunday 8/9; Access to Priority Line to the film screenings at the Japan Film Festival of San Francisco at NEW PEOPLE Cinema from Sat. 8/8 to Sun. 8/16 (NOTE: Film tickets are NOT included, sold separately); Access to Priority Line to SAKE SUMMIT at UNION SQUARE on Sat. 8/8 and Sun. 8/9. (NOTE: Admission to SAKE SUMMIT is NOT included, sold separately); Access to VIP Check-In at The Castro Theatre and Fort Mason Center; Access to premium viewing areas at the Fort Mason Center Stage; Exclusive J-POP SUMMIT Gift Bag.