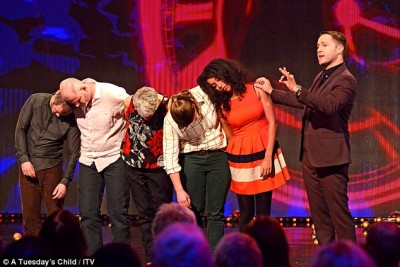 You’re Back in the Room has been ordered to series by FOX. The eight-episode, one-hour comedy series finds contestants completing everyday tasks while under the influence of hypnosis. The series is based on the U.K. format of the same name (above).

The series begins production in early 2016. For further details, follow the jump.

“YOU’RE BACK IN THE ROOM” (working title), HYPNOTIC ALL-NEW COMEDY GAME SHOW, PICKED UP BY FOX

FOX has ordered YOU’RE BACK IN THE ROOM (working title), a new eight-episode one-hour comedy game show with a hypnotizing twist. Based on the smash-hit U.K. format of the same name, YOU’RE BACK IN THE ROOM (wt) features physical comedy and unpredictable situations as contestants are challenged to complete a variety of simple, everyday tasks, from frosting a cake to painting a picture…after being hypnotized.

The series is set to begin production in early 2016 with additional details, including the host, to be announced.

“You’re Back In The Room,” produced by Tuesday’s Child, debuted in the U.K. as the No. 1 new unscripted entertainment series in 2015, ending its first season as a Top 10 series overall. The series will begin its second season in 2016 and the format has been produced in France, The Netherlands and Australia and optioned internationally in multiple territories, including Belgium, Brazil, Chile, Columbia, Denmark, Germany, Italy, New Zealand, Norway, Peru, Portugal and Spain.

YOU’RE BACK IN THE ROOM (wt) is executive-produced by Tuesday’s Child in association with BBC Worldwide Productions. Karen Smith serves as executive producer.

Tuesday’s Child Television is a U.K.-based independent production company specializing in entertainment and popular factual programming. It was launched in September 2012 by Karen Smith, the co-creator of “Strictly Come Dancing”/“Dancing with the Stars.” She was also former Shine TV joint MD (“The Magicians,” “Gladiators,” “Got to Dance,” “The Biggest Loser”). In addition to the hugely popular primetime series “You’re Back in the Room,” Tuesday’s Child has produced “Sean Conway Running Britain,” for Discovery; RTS-nominated “Superstar Dogs,” hosted by John Barrowman for Channel 4; and “RV Rampage,” hosted by Amanda Byram and Henry Cole for Travel Channel. It currently is in production with “For What It’s Worth,” for BBC One.

BBC Worldwide Productions is a key business division under BBC Worldwide North America – part of BBC Worldwide, the main commercial arm and wholly-owned subsidiary of the British Broadcasting Corporation (BBC) – which operates in the U.S. and Canada. Based in Los Angeles, BBC Worldwide Productions primarily develops and produces scripted and unscripted projects based on BBC formats/brands for cable and broadcast networks, as well as digital platforms. The production company is producer of the ratings juggernaut “Dancing with the Stars” (ABC), “Getting On” (HBO), “Top Gear” (HISTORY) and the upcoming limited series “Crime” (HBO).