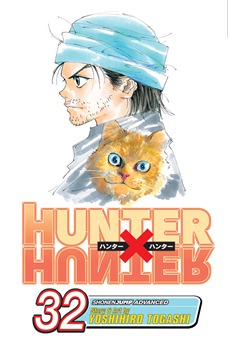 Hunter X Hunter is back! The ongoing manga action series about the licensed Hunters who track down treasures, magical beasts, and even other people returns to VIZ Media’s Weekly Shonen Jump on Monday, June 2nd. Plans are to publish dedicated volumes collecting the series on a twice annual basis.

For more, follow the jump to the press release.

The continuing series has been on hiatus, but returns on Monday, June 2nd with the simultaneous release of brand new chapters of a new story arc in the Japanese version of Weekly Shonen Jump as well as the North American digital counterpart that is published by VIZ Media. Catch the latest English issues of WEEKLY SHONEN JUMP at http://shonenjump.viz.com.

VIZ Media also delights North American WEEKLY SHONEN JUMP readers and subscribers with the announcement of the release of a brand new collectable YU-GI-OH! trading card. The latest card, Black Luster Soldier – Envoy of the Evening Twilight will be mailed to current subscribers in early August.

In the HUNTER X HUNTER manga series, Hunters are a special breed, dedicated to tracking down treasures, magical beasts, and even other people. But such pursuits require a license, and less than one in a hundred thousand can pass the grueling qualification exam. Those who do pass gain access to restricted areas, amazing stores of information, and the right to call themselves Hunters.

HUNTER X HUNTER manga creator Yoshihiro Togashi’s manga career began in 1986, at the age of 20, when he won the coveted Osamu Tezuka Award for new manga artists. He debuted in the Japanese Weekly Shonen Jump magazine in 1989 with the romantic comedy Tende Shawaru Cupid. From 1990 to 1994 he wrote and drew the hit manga series, YU YU HAKUSHO (also published by VIZ Media, rated ‘T’ for Teens), which was followed by the dark comedy science-fiction series, Level E, and the adventure series, HUNTER X HUNTER. In 1999 he married the manga artist Naoko Takeuchi.

Current WEEKLY SHONEN JUMP issues feature the latest chapters of many of the world’s most popular series such as ALL YOU NEED IS KILL, BLEACH, NARUTO, NISEKOI, ONE PIECE, TORIKO, SERAPH OF THE END and WORLD TRIGGER. Monthly series such as BLUE EXORCIST and YU-GI-OH! ZEXAL debut on the closest Monday after the Japanese release. Also serialized in the anthology is fan favorite ONE-PUNCH MAN, and the most recent addition to the magazine, STEALTH SYMPHONY. More information on WEEKLY SHONEN JUMP is available at: http://shonenjump.viz.com.