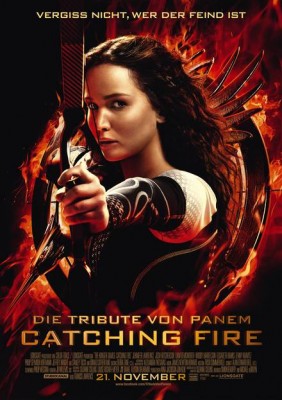 Hunger Games: Catching Fire, Director Francis Lawrence, heard my plea of no shaky cam in the sequel. I get on my knees and scream to the heavens, “For the love of god!” The first film literally made me sick on three separate occasions and I wasn’t able to make it through until it hit glorious Blu-ray. I tell you this because there was enough meat there in the first one that I actually liked. While the first film set the stage and promise of future films, Catching Fire has a been there, done that, is this all there is, feel to it.

Besides the lack of directorial gimmicks, the thing that I couldn’t quite get past this time out is how bleak, grey, and grim everything in this world is. Everyone walks around at a dawdling pace with frowns on their faces, as if being happy is against the law. I understand this is a dystopian future story, but come on, you’d think there would be some flashes of happiness or a sense of urgency.

My primary issue with this film is that while a lot happens, the film feels like it is stuck in a holding pattern and our heroine just soaks up everything around her without giving anything.  Katniss Everdeen (Jennifer Lawrence) seems to go through life blissfully ignorant of everything around her.

She is completely unaware, or at least ignores, the fact that her defiant actions in the first Hunger Games has brought hope back to people and she has become a symbol of the resistance.  That is until President Snow (Donald Sutherland) demands that she makes the country believe that her passionate love affair with Peeta Mellark (Josh Hutcherson) is real during their upcoming publicity tour. 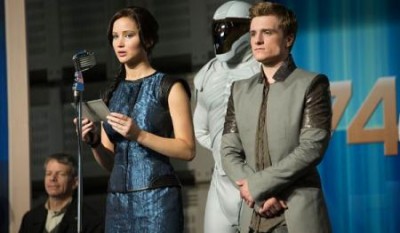 Katniss is a sponge, she sucks up the hopes and dreams of everyone around her, but I have no idea what it is she wants. She rarely does anything proactive; her big moment came in the last movie where she sacrifices herself for her sister. I was hoping we would get more of an exploration of that relationship in this film, but it is barely touched on.  Even her big protest moment when her wedding dress burns morphs into a spectacular looking “MockingJay,” she was just as surprised as everyone else.

To make matters worse Josh Hutcherson doesn’t bring anything to the table. He looks lost and doesn’t emote all that much. It is hard to build a love triangle around a woman who doesn’t seem to realize that the two men in her life actually, love her. It comes across as passionless. When Gale steals a kiss, Katniss’ reaction is, no reaction – I suppose it was supposed to be shock, Lawrence’s face looked blank.

Once again this is one of those films where the supporting cast is more interesting than the primary characters. I loved Haymitch (Woody Harrelson) and I could watch Stanley Tucci as Ceaser Flickerman all day. Elizabeth Banks‘ Effie was a joy to watch in the last film and it was nice see her with a bigger part here. Philip Seymour Hoffman  joins the cast as new game maker Plutarch Heavensbee and Sam Claflin is the roguish, self  assured fellow Champion Tribute Finnick Odair. 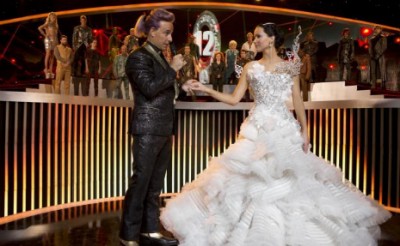 Ironically enough the main problem with this film isn’t the characters or the world they created it is with the Hunger Games themselves. This time out, it literally becomes a rip off of survivor, the games are supposed to be you against everyone else, but this time out everyone builds their own super team, which would be all well and good but nothing really happens.

In Call of Duty, I’m known as a “camper” I just pick a spot and wait for some poor soul to run in front of my sniper scope. Team Katniss doesn’t even do this minimal amount of work; they just run away from everything and literally camp.  If they made a film version of my COD sessions it’d be about as exciting as this. As much as I had an issue with the primary cast, the story does slowly draw you in but it feels like I saw this movie last year almost beat for beat, shot for shot.

While the book series is a trilogy, they are all fairly short novels; you can’t convince me that they couldn’t have made two kick-ass films and been done with it. This is the problem with this new zeal to turn every film into a trilogy or quadrilogy, there’s not enough material to justify this many films and it feels like treading water.

I don’t hate this film series, I just wish they’d get on with the story already and that Katniss was more proactive.