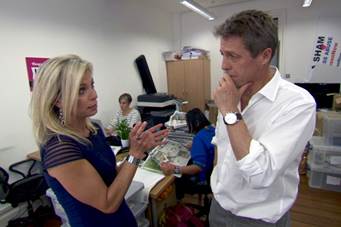 Hugh Grant is a self-confessed perfectionist – to the point that he says he’s driven others mad on set.

Grant, whose film Florence Foster Jenkins premiere on August 12th, discusses the upside (and downside) of being a perfectionist on CBS Sunday Morning (9am/8C) on Sunday, August 7th. Follow the jump for more.

Actor Hugh Grant is such a perfectionist when it comes to making movies he’s driven others mad, he tells Tracy Smith in an interview for CBS SUNDAY MORNING, to be broadcast Sunday, August 7 (9:00 AM, ET/PT) on the CBS Television Network.

But Grant, who stars alongside Meryl Streep in the new film “Florence Foster Jenkins,” says there are downsides to being a perfectionist.

In a wide-ranging interview, Grant talks about his motivation to work with Streep, his 1995 arrest for a run-in with a Los Angeles prostitute, his views on marriage and what’s next in his career.

“I’m torturing someone at the moment about a film,” Grant tells Smith when asked what’s ahead. “I like to do that for a very long time, like a cat with a half-dead mouse. And then, and usually, I walk away at the end and say, ‘I’m not going to do it.’”

“I find it hard to sign on the dotted line, sometimes,” Grant adds.

Grant, who was himself a victim of cellphone hacking, also talks with Smith about his work with the watchdog group Hacked Off, which speaks out against abuses by the British tabloid press. The project occupies more of his time than making films these days, and he’s content that way.

CBS SUNDAY MORNING is broadcast Sundays (9:00-10:30 AM, ET/PT) on the CBS Television Network. Rand Morrison is the executive producer.