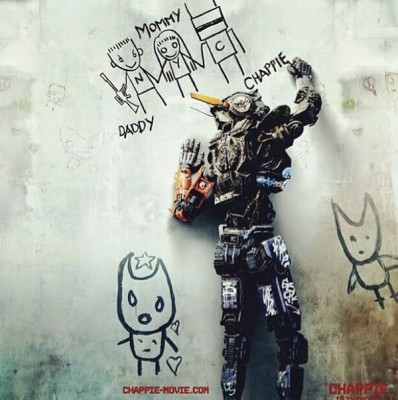 From Neill Blomkamp, the director of District 9, Chappie premieres on March 6th. Chec out the new teaser after the jump.

What happens when humanity’s last hope isn’t human?
From the director of District 9 comes his next creation…CHAPPIE. On March 6th, his mission is to save mankind.

Release Date: March 6, 2015
Every child comes into the world full of promise, and none more so than Chappie: he is gifted, special, a prodigy. Like any child, Chappie will come under the influence of his surroundings – some good, some bad – and he will rely on his heart and soul to find his way in the world and become his own man. But there’s one thing that makes Chappie different from anyone else: he is a robot. The first robot with the ability to think and feel for himself. His life, his story, will change the way the world looks at robots and humans forever.

This film is not yet rated by the Motion Picture Association of America. For future rating information, please visit www.filmratings.com. Credits not final