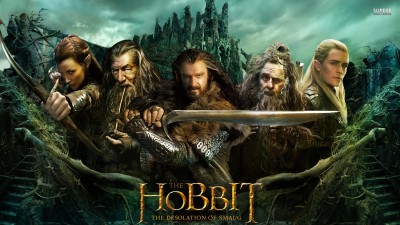 Ok, after five trips into middle earth, I’ve officially crossed over from being completely ambivalent about the world that JRR Jackson, I mean Director Peter Jackson created to pretty much hating it. I’ve seen film padding before, but Jackson’s nearly 3-hour The Hobbit: The Desolation of Smaug is a textbook example of the old adage that “Even the best directors need an editor,” and Jackson hardly qualifies as a “best director.” Someone at WB needs to learn how to say no to Jackson.

As much as I disliked the first film at least that movie did a nice job of setting up and progressing the story. This one just meandered all over the place. It felt like I was watching a movie called “Hobbit: The Sidequests.” Smaug seriously stretched my patience to the breaking point. I wanted to scream – “Get to the freaking point, already!”

This installment picks up right where the last one left all, our heroes are still on the run from the Orcs as they head towards the Lonely Mountain. Along their journey they encounter several obstacles including a big shape shifter. This entire sequence felt like filler and did nothing to move things forward. Yes, Jackson did an amazing job on the CGI Bear; it looked appropriately scary and menacing, but again what was the point?

They eventually find themselves going through a scary forest of darkness where they spend an inordinate amount of time fighting giant Giant Spiders and falling out of trees. We find out how Bilbo’s sword got its name of Sting.  Speaking of Bilbo, he comes into his own in this film, thanks to the one ring, he becomes bolder and ends up rescuing the bungling Dwarves – a lot.

Besides the tedious length of the film, the shallow story, and the lack of any characterization, the movie fails to make you sympathize with Thorin. If anything it made me root for him not to succeed in his quest. He would make a lousy King. He’s mean, selfish and has shown no sense of loyalty to anyone in his party. After six hours of movie, I still have no clue who any of these dwarves are or why they are even following Thorin, other than the basic “We want our homeland back.”

Every time someone is injured he shows no qualms about leaving them behind to continue his quest.  He did it to Bilbo several times in the Hobbit and does it again this time around. The one time he ever shows any kind of King like quality is when he promises a Village that if they help him, he would restore prosperity. It was supposed to be a ra ra moment, but it comes across as more of Thorin’s selfishness. He doesn’t give a crap about that village; he just wants his precious stone.

When did the Elves become such jagoffs? In the first trilogy they were noble, conscientious (if not arrogant and pretentious) kick-ass warriors. In this film they are still kick-ass, but they have a feud going with the Dwarves that is never explained and there’s some weird romance thing going on between one of the Dwarves and new character Tauriel (Evangeline Lilly) who seems to have something going on with Legolas (Orlando Bloom).

Thorin is also a really bad military strategist. The final fight with the Smaug drove me nuts; it was over done, and made no logical sense. I just wanted one of them to scream – “hey, let’s try putting an arrow in that gigantic glowing soft spot.”

It is clear Jackson didn’t know where he wanted to end this film.  I swear there were about five different points in the last 30 minutes where I gathered my things and was ready to get the heck out of there, but it kept going and going.

Every five or ten minutes our merry band of adventurers were falling, rolling, running and fighting their way through one ridiculous thing after another. It felt like I was watching someone giving a video game or theme park pitch than a real movie.

This method of serpentine, never ending, storytelling is only acceptable if it was pitched as being told in real time – 3 years, 9 hours (not even factoring in the extended additions). So basically it’ll be what, 2015 before we see the complete story? The middle part of a trilogy is supposed to make you want to return, this one just makes me dread visiting this depressing, drab, world ever again.

11 thoughts on “The Hobbit: The Desolation of Smaug is one trip too many to Middle Earth, Michelle’s Review!”