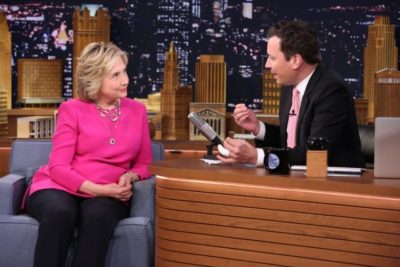 Democratic Presidential Nominee Hillary Clinton will return to The Tonight Show with Jimmy Fallon a week before the first scheduled presidential debate. This will be Clinton’s third appearance on the show.

Clinton’s appearance comes during the height of the campaign for the White House and a week before the highly anticipated presidential debate between the former Secretary of State and Republican presidential nominee Donald Trump.

This will mark Clinton’s third appearance on “The Tonight Show.” She was previously a guest on Sept. 16, 2015 and Jan. 14 earlier this year.

Sept. 19 kicks off the first Monday of the new TV season as NBC launches the fall timeslot premiere of hit series “The Voice” at 8 p.m. – with new coaches Miley Cyrus and Alicia Keys joining Blake Shelton and Adam Levine – as well as back-to-back episodes for the premiere of the new comedy “The Good Place,” starring Ted Danson and Kristen Bell.

The premiere week schedule is as follows:

From Universal Television and Broadway Video, “The Tonight Show Starring Jimmy Fallon” is executive produced by Lorne Michaels and produced by Josh Lieb. Gavin Purcell produces. “The Tonight Show” tapes before a live studio audience from Studio 6B in 30 Rockefeller Center.