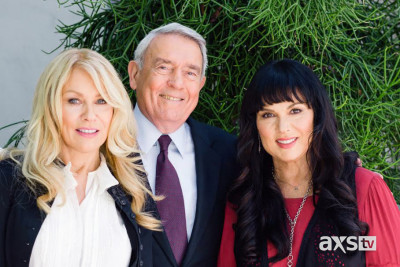 Dan Rather interviews Anne and Nancy Wilson of Heart in the third season premiere of The Big Interview (AXS TV, Tuesdays, 8/7C) when it returns on October 20th.

Also among the subjects of third season episodes are legends of music and film Gregg Allman, Patti Labelle and Quentin Tarantino. for further details (including the complete of season three episodes) follow the jump.

SEASON THREE OF ‘THE BIG INTERVIEW’ WITH DAN RATHER RETURNS TO AXS TV WITH A NEW FALL CYCLE OPENING WITH GROUNDBREAKING ROCK DUO HEART ON TUES. OCT. 20 AT 8pE

LOS ANGELES – October 5, 2015 – THE BIG INTERVIEW returns to AXS TV, kicking off the all-new season three fall cycle on Tuesday, October 20, at 8pE. Hosted by celebrated newsman Dan Rather, the series boasts exclusive, in-depth discussions with some of the biggest names in music, film, and television, as the reporting veteran gets them to open up about their personal lives and esteemed careers in his trademark fashion.

This fall season’s roster features seven candid and thought-provoking conversations, opening with trailblazing rock n’ roll pioneers Ann and Nancy Wilson, beloved front women of the band Heart, whose signature vocals and guitars have crafted a catalogue of hits such as “Crazy On You,” “Alone,” and “Barracuda,” selling over 35 million records worldwide, and earning the duo a place in the Rock N’ Roll Hall of Fame in 2013. Then, on October 27, Rather sits down with influential actress, author, and R&B Queen Patti LaBelle, as the prolific star dishes on an illustrious legacy that includes a successful run with the soulful trio Patti LaBelle and the Bluebelles, the first African-American group to be featured on the cover of Rolling Stone; two GRAMMY® wins; countless classics from “Lady Marmalade” to “New Attitude”; and an Emmy®-nominated acting career with roles in hit series such as AMERICAN HORROR STORY, EMPIRE, and more.

Also appearing on THE BIG INTERVIEW this season is prolific Allman Brothers Band founder Gregg Allman (“Midnight Rider,” “Ramblin’ Man”) on November 3; Rock hero Bryan Adams (“Summer of ‘69,” “I Do It For You”) on November 10; groundbreaking country music star Charley Pride (“Just Between You and Me,” “All I Have To Offer You (Is Me)”) on November 17; legendary filmmaker Quentin Tarantino, the Oscar®-winning writer and director of favorites such as PULP FICTION and RESERVOIR DOGS, on November 24; and supermodel-turned-super-mogul, leading lifestyle designer and activist Kathy Ireland on December 1, a World AIDS Day conversation about her close friend and business associate Dame Elizabeth Taylor and her crusade to galvanize international attention, research and treatment of HIV AIDS which has been marginalized as “someone else’s problem.”

“Over the course of three seasons, THE BIG INTERVIEW has given viewers an in-depth look at some of the biggest names in entertainment that they rarely get to see,” said Michele M. Dix, AXS TV’s senior vice president, programming and development. “With an eclectic roster featuring a wide variety of influential figures from all across the industry, the upcoming fall cycle promises to uphold the show’s legacy as Dan Rather seeks to uncover the people underneath the larger-than-life personalities, as only he can.”

THE BIG INTERVIEW’s fall premiere schedule is as follows: