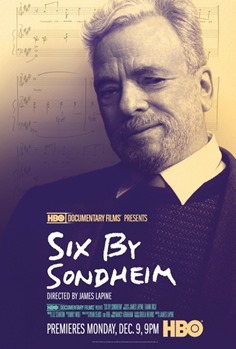 Stephen Sondheim is the genius behind such Broadway musicals as Sweeny Todd and Sunday in the Park with George. His works have performed onstage by the likes of Ethel Merman, Bernadette Peters, Many Patinkin and Audra McDonald.

On Monday, December 9th, HBO will present an extensive profile of Sondheim structured around six of his most iconic songs – Six by Sondheim. Told primarily in Sondheim’s own words, Six by Sondheim will feature both re-stagings and archival performances of Sondheim standards by Merman, Peters, Patinkin, McDonald and others (including Darren Criss and America Ferrera) – and cover his six decade career. Check out the press release, after the jump, for further details.

SIX BY SONDHEIM, AN INTIMATE LOOK AT THE LIFE AND ART OF THE RENOWNED COMPOSER AND LYRICIST THROUGH SIX ICONIC SONGS, DEBUTS DEC. 9, EXCLUSIVELY ON HBO

“Everybody has problems. Nobody goes through life unscathed, and I think if you write about those things, you’re going to touch people,” says Stephen Sondheim in SIX BY SONDHEIM, an intimate and candid look at the life and art of the legendary composer-lyricist. Since his Broadway debut at age 27 as the lyricist for “West Side Story,” Sondheim has redefined musical theatre over the course of a six-decade career through such groundbreaking works as “Company,” “Sweeney Todd” and “Sunday in the Park with George.”

Directed by Tony Award-winner and frequent Sondheim collaborator James Lapine, SIX BY SONDHEIM is a highly personal profile of a great American artist as revealed through the creation and performance of six of his iconic songs. Told primarily in Sondheim’s own words, this feature documentary weaves together dozens of interviews with the composer, rarely seen archival material spanning more than half a century (including newly discovered footage of Ethel Merman performing “Gypsy”) and re-stagings of three songs produced especially for the film. Executive produced by James Lapine and Frank Rich, the exclusive HBO presentation debuts MONDAY, DEC. 9 (9:00-10:30 p.m. ET/PT).

The documentary reveals how art and life have been intertwined for Sondheim since childhood, when his mother’s friendship with the family of the legendary librettist and lyricist Oscar Hammerstein II would introduce the young Sondheim to a surrogate father and artistic mentor, ultimately starting him on the path to a career in the theater.

“Something’s Coming”: Sondheim got his break writing lyrics for Broadway’s “West Side Story,” collaborating with composer Leonard Bernstein. As Sondheim explains, they created an opening number that would give Larry Kert, a young performer, the confidence to hold the stage in his first starring Broadway role. Though Sondheim treasured his collaboration with Bernstein, he regarded lyric writing as a stop on the way to his true goal of writing both music and lyrics.

“Opening Doors”: Sondheim calls this song from “Merrily We Roll Along” – about three young writers trying to break into show business – his most directly autobiographical song. “I was trying to recapture what I was like when I was 25 and 30 years old,” he says. Jeremy Jordan, Darren Criss, America Ferrera, Jackie Hoffman, Laura Osnes and Sondheim perform “Opening Doors” in a new segment directed by James Lapine.

“Send in the Clowns”: Written for Glynis Johns’ breathy voice, it became his biggest hit song, taking off two years following the opening of “A Little Night Music,” after both Judy Collins and Frank Sinatra covered it. Audra McDonald and Will Swenson perform “Send in the Clowns” in a new segment directed by Autumn de Wilde.

“I’m Still Here”: Sondheim wrote this tour de force for movie star Yvonne de Carlo during the pre-Broadway Boston tryout of “Follies” as a last-minute replacement for the song “Can That Boy Foxtrot!” As he explains, the lyrics were inspired by the life of resilient Hollywood legend Joan Crawford. Jarvis Cocker of the rock band Pulp performs “I’m Still Here” in a new segment directed by Todd Haynes.

“Being Alive”: While writing “Company,” a show about “the difficulties and joys of marriage,” Sondheim, a self-described loner “out of habit” since childhood, asked his married friends for comments about their relationships. Dean Jones, the star of the original Broadway production, performs “Being Alive” in an excerpt from the classic documentary “Company: Original Cast Album,” directed by D.A. Pennebaker.

“Sunday”: The song closest to Sondheim’s heart comes from “Sunday in the Park with George,” inspired by Georges Seurat’s painting “A Sunday Afternoon on the Island of La Grande Jatte.” He says that for him part of the profound quality of the Seurat work stems from the fact that the figures depicted don’t know they’ve been immortalized. Sondheim gave his song an “almost funereal” beat that becomes a triumphant march and builds to the word “forever.”

Stephen Sondheim has written music and lyrics for more than 20 shows. He won a Pulitzer Prize in Drama for “Sunday in the Park with George” in 1985, and has received multiple Tony Awards, including a special Tony Award for Lifetime Achievement in Theatre in 2008. In 1990, he won an Oscar® for Best Music, Original Song for “Sooner or Later (I Always Get My Man),” from “Dick Tracy.”

Director James Lapine has collaborated with Stephen Sondheim on several acclaimed shows, writing the book for and directing “Sunday in the Park with George,” “Into the Woods,” “Passion” and “Sondheim on Sondheim.” He has received three Tony Awards, five Drama Desk Awards and the Pulitzer Prize. Lapine executive produces SIX BY SONDHEIM along with New York magazine’s Frank Rich, a former chief theatre critic for the New York Times and currently an executive producer of the Emmy®-winning HBO comedy series “Veep.”