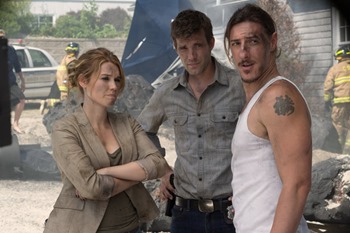 Syfy announced today that its hit supernatural series Haven has been picked up for a double-sized fifth season – twenty six episodes! This can be attributed to the show’s continued growth (averaging 2.3 million viewers on Friday nights – and running against new shows from all the big networks!) and the show’s fans being extremely media savvy (Season 4 was Haven’s best season to date in social mentions and Twitter activity). Season 5.0 will premiere this fall, with Season 5.5 debuting in 2015.

Over the course of Haven’s run on Syfy, series creators Sam Ernst and Jim Dunn have repeatedly said in interviews that they had a complete story planned for Haven – a ‘seven-season plan.’ With today’s news that Season 5 of Haven will be 26 episodes, I have to wonder if Ernst & Dunn’s plan was based on 13-episode seasons – making Season 5, in effect, years five and six of their overall plan. Or, maybe, because the series has proven so durable and so good, if perhaps Syfy might be trying to stretch things out a bit. Ernst and Dunn are not listed as executive producers on the show in the press release (read it after the jump), so that gives me pause…

FIRST 13 EPISODES TO PREMIERE THIS FALL

The company’s comprehensive network extends around the globe including Canada, the US, the UK, Ireland, Spain, Australia, New Zealand, Benelux, France, Germany, Scandinavia, South Africa and South Korea. Through established Entertainment and Distribution divisions, the company provides extensive expertise in film distribution, television and music production, family programming and merchandising and licensing. Its current rights library is exploited across all media formats and includes more than 35,000 film and television titles, 2,800 hours of television programming and 45,000 music tracks.  http://www.entertainmentonegroup.com/

Universal Networks International, the international channels division of NBCUniversal, is one of the world’s premier entertainment portfolios, delivering quality content and compelling brands to over 176 territories across Europe, the Middle East, Africa, Latin America and Asia Pacific. The brands in the portfolio include Universal Channel, Syfy, 13th Street, Studio Universal, E! Entertainment Television, The Style Network, DIVA Universal, Telemundo and Golf Channel. These unique brands deliver a full range of entertainment experiences to local audiences across the globe.

Photo by Michael Tompkins/Courtesy of Syfy