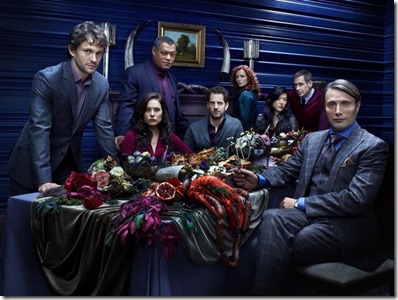 Tonight’s premiere of Bryan Fuller’s Hannibal (NBC, Thursdays, 10/9C) is a deeply disturbing delight that is the absolute antithesis of his Pushing Daisies. In his approach to Thomas Harris’ characters, he has come up with a style that might be described as The Profiler: Twin Peaks Edition – though that doesn’t nearly capture the heightened reality Fuller has created here.

Though the series is called Hannibal the lead is actually Will Graham (Hugh Dancy), a psychology professor who used to be an FBI agent until his work caused him to leave. His ability to fully empathize with people gives a unique ability to get inside a serial killer’s mind and figure not only how they do things but why.

Graham is brought back into the FBI by Jack Crawford (Laurence Fishburne, CSI) because of a series of disappearances – of seven women with particular physical characteristics – and one return, definitely dead but replaced in her bed in her parents’ home.

Here is where the show gets away with a huge technicality – during Hannibal’s promotion, we were told that the show’s murders would happen off-screen. Technically that is the case. What we see, in all their disturbing glory, are Graham’s recreations of the crimes in his mind, as he describes them to Crawford (or, eventually, to Mads Mikkelsen’s Hannibal Lecter). 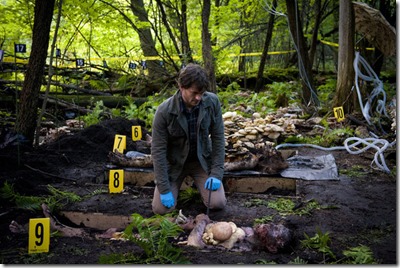 It’s well into the first episode (twenty minutes of actual program – almost half an hour in network time) before we meet Lecter. He’s charming, intelligent, perceptive and arrogant in ways that do not recall his predecessors in the role (Brian Cox in Manhunter; Anthony Hopkins in Silence of the Lambs and the excruciating 2001 sequel/prequel Hannibal).

Graham does not do well socially (he says that on the autism scale, he’s at Asperger’s), but he’s very good at his jobs. Dancy makes his affection for and habit of taking home stray dogs (easier than humans to get along with) seem perfectly natural for the character.

Mikkelsen (Casino Royale, Valhalla Rising) captures Lecter’s intelligence and wit in a unique way: nothing flashy, though most everything else about the character – clothes, home, office, cooking (!) is. It’s a wonderfully restrained performance. Lecter knows he’s the smartest person in the room and flaunts in other ways than the obvious (most of the time). He also plays against Graham and the FBI in small ways – one of which will be especially noticeable in the premiere this evening. 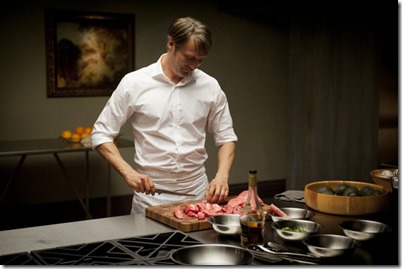 Bloom’s role in the series is to help Graham keep himself stabilized and grounded. As his friend, she’s also his unofficial psychiatrist – a role Lecter subtly works to undermine. Dhavernas brings a warmth and determination to the role that is her most important contribution to the series.

Lounds is a yellow journalist of the worst stripe: she will do anything to get a story – including the use of questionable means to obtain information from a police detective. Chorostecki is the second lead in the love to hate character area (behind Lecter, of course). She may also be psychopathic. That remains to be seen.

As with any Bryan Fuller series, Hannibal has a unique look. It’s hard to heighten a reality composed of somber colors (greens, blues, grays), but he and director David Slade (Hard Candy, the Awake pilot and, unfortunately, The Twilight Saga: Eclipse) somehow manage to do just that.

Hannibal is also paced a bit more slowly than the usual network drama, but when there’s action it’s extremely effective. The writing is, as with most of Fuller’s work, frequently extraordinary – and he has a cast that can do it justice. His peculiar sense of humor permeates the show, too – right down to the episode titles: course of an elaborate meal (the premiere is Apertif, followed by Amuse-Bouche, Potage, Coquilles and Entrée for the five episodes included in the press kit).

Hannibal is unlike anything you’ve seen on network TV. That didn’t help Fuller series like wonderfalls or Pushing Daisies, but it might just work with audiences here. It’s certainly worth the time taken to check it out.