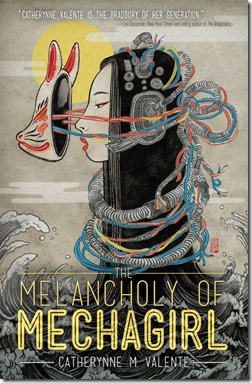 Haikasoru’s Melancholy of Mechagirl, by Catherynne M. Valente, is the imprint’s first from a non-Japanese author – but between the book’s Japan-inspired stories and poems, and the author’s award-winning pedigree, it seems a natural choice.

With subjects like a woman who dreams of machines; a paper lantern that falls in love and the most compelling videogame that you’ve never played – and that nobody can play twice, Melancholy of Mechagirl definitely fits the profile of Haikasoru, the first U.S.-based imprint to dedicated to publishing translations of fine Japanese science fiction and fantasy. The book includes stories that were nominated for Hugo and Locus Awards – and Valente is a three-time Locus Award winner.

Melancholy of Mechagirl is available now. Valente has also been nomineted (twice) for World Fantasy Awards. Haikaoru is an imprint of VIZ Media.

VIZ Media’s Haikasoru literary imprint delivers an exciting collection of stories and poems by New York Times best-selling fantasy and science fiction author, Catherynne M. Valente, as it announces the release of MELANCHOLY OF MECHAGIRL. The new book is available now through all major book retailers, is rated ‘T’ for Teens, and carries an MSRP of $14.99 U.S. / $16.99 CAN. An eBook edition is also available for $8.99 (U.S. / CAN) for the Amazon Kindle, Apple’s iBooks Store, and the Barnes & Noble’s Nook Book Store.

A woman who dreams of machines; a paper lantern that falls in love; the most compelling video game that you’ve never played – and that nobody can ever play twice. This collection of Catherynne M. Valente’s stories and poems with Japanese themes includes the celebrated novella, “Silently And Very Fast,” the award-nominated, “13 Ways of Looking at Space/Time,” and “Ghosts of Gunkankima,” which originally appeared in a tiny book smaller than a human palm and was published in a limited edition of only 24.

“MELANCHOLY OF MECHAGIRL is Haikasoru’s first release by a non-Japanese author, but Catherynne Valente’s vivid prose and Japanese inspirations make this collection ideally suited to our publishing mission,” says Nick Mamatas, Haikasoru’s editor. “The collection of inventive short stories and poems also features some of Valente’s most admired stories, including the Hugo Award-nominated novella, ‘Silently and Very Fast’ and the Locus Award finalist ‘13 Ways of Looking at Space/Time,’ along with a pair of brand-new stories to anchor the collection: the semi-autobiographical, meta-fictional, and utterly magical, “Ink, Water, Milk,” and the cinematic, demon-haunted, “Story No. 6.”

Catherynne M. Valente has been lauded by many as one of the best writers to emerge in the science fiction/fantasy genre in the last decade. A New York Times bestseller for The Girl Who Circumnavigated Fairyland in a Ship of Her Own Making (#8, May 2011), she has also been a Hugo Award nominee in multiple categories, including Best Novel, Best Novella, Short Form Editor, and Best Fan Cast. She has been a Hugo Award winner for Best Fan Cast, a two-time World Fantasy Award nominee, three-time Locus Award winner (in the same year in three categories), and an Andre Norton Award winner.

For more information on MELANCHOLY OF MECHAGIRL and the Haikasoru imprint, please visit the website at www.haikasoru.com.