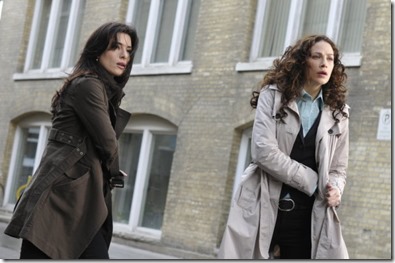 It’s been too long, but Warehouse 12’s once-then-renegade-then-reformed agent, H.G. Wells will finally be returning to Warehouse 13 (Syfy, Mondays 10/9C0 in an episode called Instinct on Monday, June 3rd, guest-starring Jaimie Murray as the mother of science fiction/adventurer.

With Warehouse 13 following Defiance on Monday nights, this makes this coming Monday Jaimie Murray Night on Syfy. (Cool, right?) Murray will live tweet with fans during both shows. Follow the jump for the press release – which just happens to to contain the tag for Instinct – for details.

AN ALL-NEW DEFIANCE AIRS MONDAY, JUNE 3 AT 9PM ON SYFY FOLLOWED BY WAREHOUSE 13 AT 10PM

JAIME MURRAY TO TWEET LIVE WITH FANS DURING BOTH SHOWS

NEW YORK – May 29, 2013 –Jaime Murray is taking over Syfy on Monday, June 3 from 9-11PM (ET/PT) when the Defiance star returns to Warehouse 13 as H.G. Wells, the “father” of science fiction and sometimes-Warehouse Agent, who disappeared last season.

In the Warehouse 13 episode, “Instinct,” premiering at 10PM (ET/PT), H.G. shockingly resurfaces when Pete (Eddie McClintock) and Myka (Joanne Kelly) track down a crime vigilante with a vicious artifact that savagely disfigures its victims. The reunion is cut short when someone H.G. cares about is caught in the crosshairs of the artifact hunt. Myka must race to bag the artifact before H.G. reverts to her dark past in a lust for vengeance.

To enhance the second screen experience for fans of both series, Murray will live tweet from 9-11PM (ET) during Syfy’s two-hour Powerful Mondays programming block.