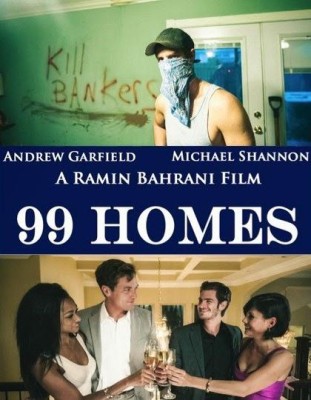 When a young man’s family home is foreclosed, he winds up working for the real estate broker who claimed it in order to put a roof over his family’s heads.

99 Homes stars Andrew Garfield and Michael Shannon. It will be in theaters on September 25th. Check out the gut-wrenching trailer after the jump.

In this timely thriller, charismatic and ruthless businessman, Rick Carver (Academy nominee Michael Shannon), is making a killing by repossessing homes – gaming the real estate market, Wall Street banks and the US government. When he evicts Dennis Nash (Golden Globe nominee Andrew Garfield), a single father trying to care for his mother (Academy Award nominee Laura Dern) and young son (newcomer Noah Lomax), Nash becomes so desperate to provide for his family that he goes to work for Carver – the very man who evicted him in the first place. Carver promises Nash a way to regain his home and earn security for his family, but slyly seduces him into a lifestyle of wealth and glamour. It is a deal-with-the-devil that comes with an increasingly high cost – on Carver’s orders, Nash must evict families from their homes. As Nash falls deeper into Carver’s web, he finds his situation grows more brutal and dangerous than he ever imagined.

Subscribe now for all the newest film trailers from Broad Green Pictures!