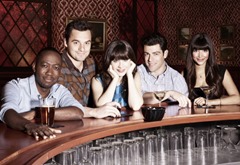 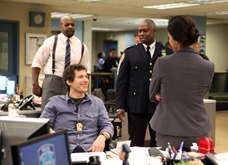 Not only do New Girl and Brooklyn Nine-Nine get the plum timelsot following Super Bowl XLVIII, they also rock the guest stars. On New Girl, Jess’ best friend, Cece, gets an exclusive invitation to Prince’s New Year’s party, while Fred Armisen and Super Bowl winning quarterback Joe Theismann are among the guest stars on Brooklyn Nine-Nine as the precinct’s arch-rival The Vulture (Dean Winters) returns.

In the all-new “Operation: Broken Feather” episode of BROOKLYN NINE-NINE (airing approx. 11:00-11:30 PM ET/8:00-8:30 PM PT), Jake (Andy Samberg, who won this year’s Golden Globe Award for Best Performance by an Actor in a Television Series – Comedy or Musical) and Amy (Melissa Fumero) investigate a string of hotel robberies together, but their partnership is put to the test when he finds out she may leave the Nine-Nine to work in the Major Crimes unit with “The Vulture” (guest star Dean Winters). Meanwhile Captain Holt (Andre Braugher) and Sergeant Jeffords (Terry Crews) strategize to make the precinct more efficient. Fred Armisen (“Portlandia,” “Saturday Night Live”) and Super Bowl-winning quarterback Joe Thiesmann guest-star, among other surprise appearances.

BROOKLYN NINE-NINE is produced by Universal Television, 3 Arts Entertainment and Fremulon. The series is created and written by Dan Goor (“Parks and Recreation,” “Late Night with Conan O’Brien”) and Michael Schur (“Parks and Recreation,” “The Office”). The series is executive-produced by Goor, Schur and David Miner (“30 Rock”). The pilot was directed by the team of Phil Lord and Chris Miller (“21 Jump Street,” “Cloudy with a Chance of Meatballs”).