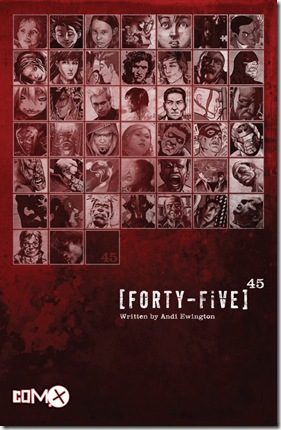 Anyone who’s read previous Com.X releases [Cla$$War, Razorjack, etc.] will likely be delighted with the publisher’s newest release, [Forty-Five]. It’s a unique idea that may have been inspired – at least in part – Who’s Who collections of the sort that Marvel and DC have published in the past, but with one unique twist. Rather than just being a collection of the various heroes and villains from a singular universe, creator/writer Andi Ewington presents the forty-five characters [super, normal and/or mech-based] as part of a search by its author, journalist James Stanley as he ponders the possible directions that his about-to-be-born first child might take – especially if he’s born with superpowers!

In the [Forty-Five] world, it is possible to tell whether a child will be born with superpowers thanks to geneticists have isolated a common gene – called the Super-S Gene – found only in superpowered persons [also referred to as Super-S’s]. Stanley and his wife have chosen not to take the Super-S test but, as her pregnancy progresses, Stanley finds himself wondering, more and more often, about the possibility their child will be born with superpowers.

Thus, he finds himself on a journey of discovery – interviewing Super-S’s [heroes, villains, active, retired] and Normans [the slang terms for normals] – to learn about the ways superpowers could effect a child. To quote from Stanley’s introduction, “Could I cope with the pressures of a child bestowed with a gift to do extraordinary things? What future can my son or daughter look forward to? If he or she is diagnosed as a Super-S, will they be free to live a normal life? What physical and psychological hurdles would they face growing up?” As Stanley interviews his chosen subjects, he learns that there are as many influences put in play for Super-S’s as for anyone else.

The further Stanley goes into his project, the more he encounters an increasingly ominous organization called XoDOS. At first, when he is just beginning, interviewing Michael and Felicity Brown about their five-hour old son, it’s just a business card for Ms. T. Lorien, Executive Administrator & Liaison Director, XoDOS. According to Michael, Ms. Lorien claimed to represent a “U.S. Presidency initiative that offered support and financial stability to families like ours.” 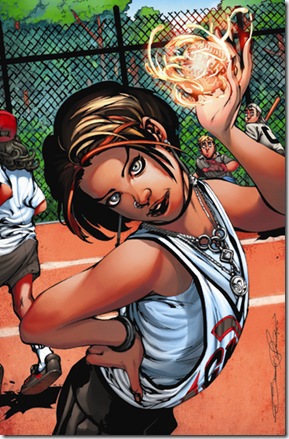 As he interviews others – like Eddie Wallace, father of a very special five-year old; the Miles-Miller family [where the parents have already planned out their nine-year old son, to his discomfort]; Jennifer Turner, single parent of three, one of whom is Super-S, with a tenuous hold on her temper; Hannah Hawkins, a seventeen-year old who is about to meet her Super-S father for the first time; twenty-seven year old German Super-S Militar, who makes a groundbreaking announcement; thirty-year old Jack Redden, a Super-S arsonist, and more – he learns more and more about XoDOS and what he learns isn’t as positive as they might want the public think. The last few pages are a mind-kicker…

Ewington uses Stanley’s quest to introduce a host of interesting characters that give Forty-Five’s world a feeling of depth and intrigue. One of the things that make the book so interesting is that we encounter characters that have abilities or equipment that might be familiar, but it puts the emphasis on the characters rather than the powers. There are other characters that can run really fast, or control fire, or off whom bullets bounce; in Stanley’s brief interviews [a single page per character] he learns that people are people – whether or not they have powers or mechanical aptitudes. They can make the same mistakes as the rest of us – but they can also be as positive as the best of us.

Through the XoDOS organization, Ewington builds an understated sense of menace that reflects the fears of Americans about Homeland Security only ramped up to exploit Superpowered characters to unknown ends [see also: mind-kicking last pages].

The end result is a smart, delightfully varied work [each interviewee is drawn by a different artist] that creates an entirely new comics world in which everything is – to us, at least – new and vibrant. Ewington’s writing is excellent – he invests his characters with unique voices [an immense undertaking]. The art ranges from slick superhero art [The Browns and their flying baby] to indie comic [the Miles-Miller interview], to the outright odd [Turncoat] and pure super-hero [Ultra-Sonic]. The matching of artists to characters is pretty much spot on [frequently spectacularly so].

Some of my personal favourites are Steve Sampson’s Katrin Dupuis, Boo Cook’s Black’Jak’d, Dan Brereton’s flying baby, and Edu Francisco’s Monica Bentley [above]. What is really scary is that there isn’t one illustration that doesn’t capture its character, and beautifully. 45/45. Pretty amazing stuff.

One of the reasons to check out any Com.X title is that they make sure that every title they publish is properly developed and perfected before they even consider publication. That includes extras, like the various sketches and studies to be found at the end of the book; the surprising depth in the contributors’ bios; the Terminologies; the forewords by James Krueger [Earth X, Justice and Footsoldiers] and Optimus Douche [Rob Patey, Ain’t It Cool News], and Ewington’s The Birth of Forty-Five.

[Forty-Five] is the goods.