One of the best episodes of television’s Angel was an episode called Smile time – in which Angel became a muppet-like puppet while investigating a children’s show that appeared to be putting children into comas, while sporting Joker-like rictus-grins. Like the best eps of the series, Smile Time combined off-the-wall horror with equally off-the-wall humor. 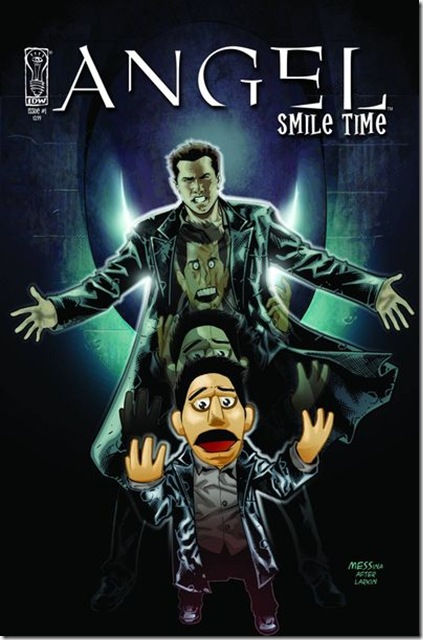 IDW adapted the episode into a three-issue mini-series and followed it up with a puppet/werewolf date and a mini-series that followed Spike and green demon Lorne to Japan, where a Japanese version of the deadly kiddie show was doing the same thing to Japanese kids.

Angel – Smile Time collects these connected tales into a hardcover volume with white, acid-free paper. The result is a really good looking volume that does justice to the admittedly deranged [in a good way] material.

Smile Time is written by Scott Tipton, with art by David Messina and Elena Casagrande; Masks is written by Jeff Mariotte and drawn by Stephen Mooney, and Shadow Puppets is written by Brian Lynch and rendered by Franco Urru.

Smile Time may actually work better as a comic than it did as a TV episode. In the comics, puppets look better – and more real – in the “real world,” and the artists of Smile Time and shadow Puppets really make use of that advantage. Asa result, Smile time is even more entertaining here than it was on TV.

Masks finds Angel finally twigging to the fact that Nina, the werewolf girl whose life he saved on the TV series and taking her out for dinner– before the spell that turned him into a puppet has worn off. The disparity between the seriousness of the emotions rising between the characters is offset but the absurdity of their situation [a werewolf on a date with a puppet? Priceless!]. The result is a surprisingly touching interlude.

In Shadow Puppets, Spike, everybody’s favorite second-vampire-with-a-soul finds that he needs to spend some time away from Los Angeles – something about a debt – and allows everyone’s favorite former-owner-of-a-karaoke-bar, Lorne, to talk him into investigating the Japanese version of Smile Time.

Besides a whole new cast of demon-inhabited puppetry, Shadow Puppets introduced a set of twin ninja babes who take turns crushing on Spike – even after he suffers the same ignominious change that Angel underwent in Smile Time. And, yes, the plot is even more twisted than in the original – this set of demons aims to drain the souls of all the children in the world [BWA-HA-HA-HA!!!].

As I was reading the Smile Time collection, I noticed some similarities in the various artists. All of them seem to be influenced to some extent by Adam Hughes, especially in the way they accomplish a great deal with a minimum of line work – and tend to draw exceedingly gorgeous women. In every case, the art is more fluid than not – though Shadow Puppets’ Urru slips in some more angular work than the others and his layouts are more dynamic. Considering that it was a “first date” tale, I found that Mooney’s art had a slightly harder edge than either Mariotte or Urru, but Mariotte was definitely a hair better at delivering the funny.

Overall, Angel: Smile Time is a collection of tales that form a longer story – something it does very well. It should appeal to fans of the TV series as well as non-fans who’ve come to know the characters through the comics.