Following some, yes, extraordinary adventures, The League of Extraordinary Gentleman [still led by Mina Murray – no thanks to Sean Connery…] have moved with the times in this, the first chapter of a six-part graphic novel. Captain Nemo is dying and his rebellious daughter, Janni, has run off to find a life for herself on land; Murray and Allan Quartermain have been joined in their unusual pursuits by gentleman thief A.J. Raffles, the omnisexual immortal, Orlando and Thomas Carnacki, Ghost Finder. 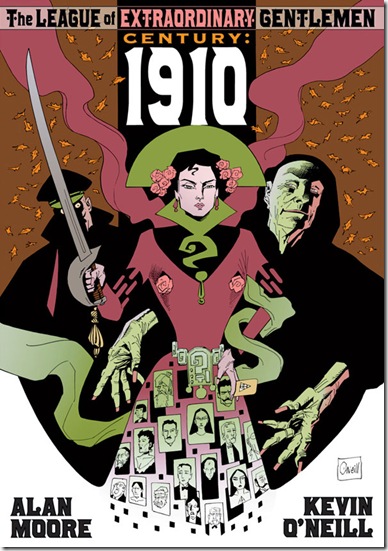 Carnacki’s frequently clairvoyant nightmares have the group on edge because of an apocalypse that may – or may not – be centered on Kings Crossing. Apparently a dead man and a suspected Jack [the Jack!] could play a role. And what is a Moonchild – and how do you make one? As Mina and her team of adventurers seek aid from a man bound to London, but not to time, and Sherlock Holmes’ smarter, fatter brother, a Brechtian lyric winds through the tale adding its own macabre mood as it springs from the lips of several different people – but always in sequence.

Alan Moore would be revered among comics fan for his work with Dave Gibbons on Watchmen, but in some ways, the collected adventures of The League of Extraordinary Gentlemen may be his magnum opus. With incredibly, consistently jaw-droppingly good art, by Kevin O’Neill, throughout, Moore has taken heroic – and not-so-heroic – characters from literature and placed them in situations that are more than simply another take on the literary works from whence they sprang.

Take Century: 1910, for example. It’s a murder mystery, horror story, tale of revenge and musical – simultaneously. It’s also a treatise on feminism [as are all the LoEG tales], politics and humanity – or lack of same. It’s fantasy, science-fiction and melodrama. Moore has created a world that exists in all genres and one genre – the original graphic novel. He breaks what others might perceive as boundaries with glee and malice aforethought. He bends literary characters in ways for which they were most assuredly not intended – and makes it seem completely natural. In the case of 1910, he’s composed a combination penny dreadful [19th century] and tone poem [20th century] at the very least.

As always, Kevin O’Neill’s art captures the moods of Moore’s scripts with an agility that seems odd for an artist whose work is most often jagged and jarring – especially when he moves away from harsh angles and introduces the gentlest of curves. Here, he is both harsh and lyrical [the two not being mutually exclusive]; dead straight and darkly humorous. If Moore’s scripts are Bach manuscripts, then O’Neill’s art is Procol Harum playing with their moods.

Century: 1910 is the first part of a trilogy that will bring the League into the present – and as good a high adventure, or as they used to call it before the word got diluted down to meaning love story, a high romance.

The text feature that rounds out the volume – Minions of the Moon, by John Thomas [possibly the best bit of wordplay in the volume] – is the first chapter in a tale that takes Mina Murray into all manner of strange worlds and dimensions – including one which contains superheroes – and does have a connection to the graphic novel that is a bit unnerving; one that needs to be experienced in the same reading as What Keeps Mankind Alive? [the title of this first part of what promises to be a most disturbing tale].

Complementing the stories that are unfolding within, the inside front cover is a page of Moore’s genius takes on magazine ads of the period – a conceit that has been with the series from the beginning and includes the cleverly disguised indicia within. All in all, the first issue of Century: 1910 is a ton of perverse fun.