Gotham (FOX, Mondays, 8/7C) reaches its fall finale with an episode that is full of change. Alliances are made and dissolved; last week’s cliffhanger that wasn’t is resolved, and we see glimmering of what’s to come.

Despite some miraculous healing (or at least partial healing), some strange family values moments, perfect timing and two new additions to the streets of Gotham City all add up to a fun ride.

Alfred (Sean Pertwee) eludes Tabitha Galavan (Jessica Lucas) in a very Indiana Jones-like manner; Silver St. Cloud is given a chance to redeem herself in the eyes of her not-so-beloved Uncle Theo (James Frain); Gordon finds himself a fugitive – and in an alliance with Penguin (Robin Lord Taylor) and Ed Nygma (Corey Michael Smith).

Lee (Morena Baccarin) gets a message (and doesn’t like it); Lucius Fox (Chris Chalk) makes a discovery and shows a knack for planning; and both Lee and Gordon have major surprises for each other – and that’s even before we deal with the Order of Dumas and their plan to restore their ‘good’ name by sacrificing the last son of Gotham. And then there’s Bullock’s (Donal Logue) perfect timing (showing once again, that Logue knows how to work a scene)…

Written by series creator Bruno Heller and directed by Jeffrey Hunt, Rise of the Villains: Worse Than a Crime is yet another solid entry in Gotham’s sophomore season.

Despite Alfred’s undeniable spryness after taking a bit of a pounding (and a knife in the back) last week, And Captain Barnes (Michael Chiklis) being far too quick to put Gordon on the wanted list, Worse Than a Crime has all the muscle, melodrama and unexpected wit that marks the show’s best episodes.

FOX’s tagline for the mid-season finale states that ‘not everyone makes it out alive.’ Longtime fans of the comics will be able to figure out what important character that has to be, but for everyone else, the team of Heller and Hunt have a great time making feints and setting up red herrings.

What won’t be expected is the killer; the mention of one key antagonist from the comics and the glimpse we get of another key figure from the Bat’s gallery of villains.

David Mazouz has some lovely moments here – mostly with Silver St. Cloud (Natalie Alyn Lind) but also one terrific moment with Alfred and Lucius – and Lind gets to show her not inconsiderable chops both in playing Silver and in Silver still trying to play Bruce. 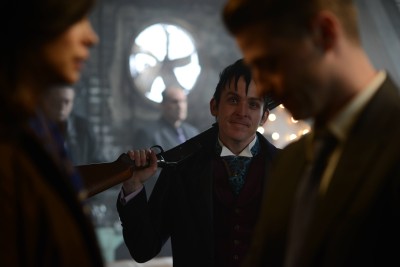 Chalk makes Lucius’ non-violent amateur status work well – and he also shows the intuitiveness we know from the comics and (especially) the Nolan Batman trilogy. Camren Bicondova also figures into the episode in a way that makes perfect sense for the Catwoman-to-be – and Bicondova nails it.

Of course, Worse Than a Crime wouldn’t work without the brio that James Frain brings to the party. Frain knows how to hold a camera hostage and can milk every emotion for maximum effect. Whether Galavan is being sleazily charming, melodramatic or just icy plain evil, Frain makes it flow.

Worse Than a Crime ends some arcs and begins a few new ones. It puts some of its regular characters in (for them) strange and unexpected situations and gives its fans reason to check back in with the series when it returns from hiatus.