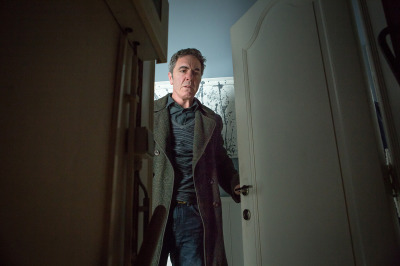 The critically acclaimed – and Golden Globe®-nominated – anthology series The Missing has been given an order for a second season.

The series, which this season has followed a father (James Nesbitt) who continues to search for his missing son years later, will again be written by Harry and Jack Williams and feature a case which the audience follows over two time frames.

The Missing’s first season concludes on January 10th. Follow the jump for more.

Beverly Hills, Calif. – December 16, 2014 – STARZ announced today a sequel to the Golden Globe® nominated limited series “The Missing.”  The new eight-part installment will again be written by brothers Harry and Jack Williams and unfold over two time frames but this time follows a new case, new characters and new location. “The Missing” is produced by New Pictures in association with Two Brothers Pictures and Playground Entertainment.

“The Missing” was recently nominated for a Golden Globe ® for Best Mini-Series or Motion Picture Made for Television and actress Frances O’Connor (Emily Hughes) was nominated for Best Performance by an Actress in a Mini-Series or Motion Picture Made for Television.  The show has received copious critical acclaim, with The Hollywood Reporter citing “A remarkable piece of television…as magnetic and challenging a work as any of TV’s recent bests…”;  Deadline Hollywood has called it, “television at its very best”; and New York Magazine praised it as “one of the year’s very best TV programs…a master-class in long form storytelling.”

The finale of the first installment of “The Missing,” which centers on the psychological fallout and ensuing years-long manhunt resulting from the sudden disappearance of five-year-old Oliver Hughes, will air on STARZ on Saturday, Jan 10. It will be available On Demand and on STARZ Play beginning Saturday, December 20.

“The remarkably talented Williams brothers crafted a beautifully complex and heart wrenching story with ‘The Missing’ and while the story, character and locations will be different in this new iteration, we anticipate the same captivating long-form storytelling and character development that critics and viewers have responded so well to,” said Starz Managing Director Carmi Zlotnik. “We have been thrilled with the critical response and look forward to continuing our terrific collaboration with the BBC, New Pictures and Playground Entertainment.”

In the UK, the series aired on BBC One and the first installment served as appointment viewing for over 7 million people each week during its run.

Willow Grylls, Charlie Pattinson and Elaine Pyke serve as Executive Producers for New Pictures; Harry and Jack Williams for Two Brothers Pictures; Polly Hill for the BBC and Colin Callender for Playground Entertainment. All3media international retains all US rights not obtained by Starz.

For additional high-resolution images and other press materials please visit the Starz Media Room at http://starz.mediaroom.com.

Charlie Pattinson launched Company Pictures in 1998 with George Faber and grew it into one of the UK’s largest and most awarded Independent Production Companies.

Playground, a New York based film, television and theater company, was founded by pioneering Emmy and Tony award winning executive and producer Colin Callender in 2012.  Playground is committed to producing quality drama working with the finest talent from the worlds of theatre, film and television in the US and the UK. Since its creation Playground has produced over 50 hours of prime time television drama garnering 5 Emmy nominations and 8 Golden Globe nominations and five Broadway shows.

Television productions include THE WHITE QUEEN for Starz and the BBC, DRACULA starring Jonathan Rhys Myers for NBC and Sky, the second season of the Starz series MAGIC CITY, the six hour mini-series DANCING ON THE EDGE for Starz and the BBC, and the critically acclaimed Starz mini-series THE MISSING an eight hour thriller co-produced with the BBC starring James Nesbitt and Francis O’Connor currently playing in the UK and the US.

Playground is currently in post-production on the up-coming six hour mini?series WOLF HALL based on the best-selling novels by Hilary Mantel for the BBC and Masterpiece starring Mark Rylance, Damian Lewis, Jonathan Pryce and Claire Foy.

A new independent company established in late 2012 by Harry and Jack Williams, joined by their Development Producer Sarah Hammond. They recently produced C4’s animated sit-com six part series ‘Full English’, animated by Rough Draft Studios (Futurama, The Simpsons Movie). Last year they made ‘The Guardians’ as a pilot for C4 and are currently shooting ‘Fried’, a comedy pilot for the BBC. They are increasingly moving into drama as well as comedy, with a number of original drama commissions already on the slate. They currently have a first look deal with 4DVD.