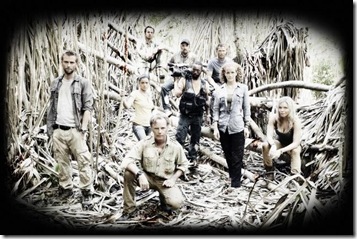 The River [ABC, Tuesday, 9/8C] is the latest attempt to produce a scary horror show for network television. Co-created by Oren Peli – of Paranormal Activity fame – it’s a show that follows the family, friends and crew of a famed explorer/television host as they follow a previously unknown offshoot of the Amazon River six months after he disappeared. And, yeah, it’s scary.

It’s not an easily arranged thing, this rescue attempt. Lincoln didn’t want any part of it – but without him, there would be no reality show and, therefore, no funding. So, reluctantly [he hadn’t been on good terms with his father for some time], he agrees and the team sets out: the Coles, Quietly, lead cameraman A.J. [Shaun Parkes, The Mummy Returns], boat owner Emilio Valenzuela [David Zapaca], Jahel Valenzuela, Emilio’s daughter and the boat’s mechanic, Lena Landry [Eloise Mumford], daughter of Cole’s missing cameraman, and Capt. Kurt Brynildson [Thomas Kretschmann, King Kong], a slightly dodgy ‘security’ expert with a portable arsenal. Oh, and a second cameraman [Jeff Galfer] who might as well be wearing a red shirt.

Their only lead is Cole’s beacon – which has mysteriously come alive six months after his disappearance. The problem is that it’s location is underwater, inside a sturdy cage that’s been broken out of. By now, the expedition has been joined by Lena, who provides another lead – but there’s no tributary of the Amazon anywhere near that location, according to their maps, and Jahel insists that it’s smack dab in the middle of a very bad place.

And now things start to go wonky. When they find Cole’s ship – The Magus – it’s been run aground and there is sound coming from the panic room, which has been welded shut from the outside! This leads to one character’s exclamation, ‘What the [bleep] was that?’ [Remember, this is both a network show we’re watching, and a network show that’s being made, so that there’s a certain amount of frantic bleeping in the name of verisimilitude…]

So far, we’ve been getting background material and leaning about the characters. We’ve seen clips from The Undiscovered Country that establish Cole’s unabashed enjoyment of his work – his catch phrase, ‘There’s magic out there!’ lets his audience in on the sheer wonder of nature.

We see the fractious relationship between Lincoln and Tess, and Carter and A.J.’s single-mindedness in regard to getting everything recorded. A brief sequence suggests that Lena might have her own agenda, and Emilio and Jahel seem like a perfectly normal father and daughter. Brynildson gets a moment that lives up to his dodgy presence.

When things start happening, most of the impact is from sounds and editing – though there is a very peculiar something that we get glimpses of both on and off camera. Like Peli’s Paranormal Activity, it’s what we don’t see that’s cause for alarm. Which is not to say that The River is a low budget project. It’s certainly not – but pricey effects are limited to moments when they can have the most impact [and even then, they’re used in such a way that they stimulate our imaginations rather than fiving us the whole picture.

In the second half of the two-hour premiere, we get some horror staples – creepy toys and possession – and, again, most of the big scares are stoked by our imaginations. Even the effects are subtle and provocative. You may never look at porcelain dolls, teddy bears or dragonflies in quite the same way as you have previously – but what heightens the effects in this half of the premiere is the connection between what’s going on and one of the would-be rescuers.

While the scares are there, there are other kinds of chilling moments – like the reasons for the scary things to happen in the first place – and the show sets things up with a kind of almost subliminal understatement [especially the cool reveal at the end of the second hour…].

Photo by Bob D’Amico/courtesy of ABC