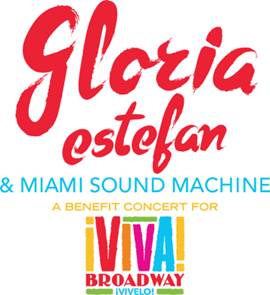 Gloria Estefan & Miami Sound Machine set to perform Monday, September 14, 2015 at the Minskoff Theatre for one night only to kick off Hispanic Heritage Month! Tickets on sale Saturday, January 24, 2015 at 7:00 am. Concert directed by Sergio Trujillo and produced by The Broadway League.

Ticket information after the jump!

Gloria Estefan & Miami Sound Machine return to New York City to perform a special concert comprising their greatest hits including: “Get On Your Feet,” “Conga,” “Rhythm is Gonna Get You,” “Mi Tierra,” and more!

The Broadway League’s Viva Broadway initiative is an audience development partnership with the Hispanic community to help bridge the world of Broadway with Latino audiences around the country. The long-term initiative aims to increase awareness about Broadway while culturally enriching lives, bringing families together, and building new careers in the theatre. Proceeds will go towards The Broadway League’s Family First Nights®, a nationwide program specifically designed to encourage economically at-risk families to attend theatre on a regular basis.

Tickets will range from $69.00 to $169.00. In addition, a limited number of VIP Packages will be available to the general public and include a pre-show champagne reception with Emilio Estefan, premium seats to the concert and post-show meet and greet cast party with Gloria Estefan and the band. Tickets can be purchased at www.ticketmaster.com or by calling 800-745-3000. For more information: www.broadway.org/info/viva-broadway.

GLORIA ESTEFAN – With seven Grammy Awards and over 100 million albums sold worldwide, she is the most successful Latin crossover performer in the history of pop music. In addition to her chart-topping hit songs “Conga,” “The Rhythm is Going To Get You” and “1, 2, 3,” among others, Gloria recorded the Oscar-nominated song “Music Of My Heart,” and has received numerous honors and awards over the course of her illustrious career. She has been presented with a star on the Hollywood Walk of Fame, inducted into the Songwriters Hall of Fame, named BMI Songwriter of the Year, and received an American Music Award for Lifetime Achievement, an MTV Video Music Award, two ACE Awards, and multiple Billboard Awards for her many chart-topping hits. Gloria has also been honored with the Ellis Island Congressional Medal of Honor (the highest award that can be given to a naturalized U.S. citizen), the Hispanic Heritage Award, and the National Music Foundation’s Humanitarian of the Year Award.

VIVA BROADWAY is an audience development partnership with the Hispanic community to help bridge the world of Broadway with Latino audiences around the country. The long-term initiative aims to increase awareness about Broadway while culturally enriching lives, bringing families together, and building new careers in the theatre. There is a National Advisory Board of industry and cultural notables to help strategize and spread the word about all that Broadway has to offer this growing and vibrant community.

FAMILY FIRST NIGHTS® is a nationwide program specifically designed to encourage economically at-risk families to attend theatre on a regular basis. Many programs exist for students to attend the theatre; however, if the experience is not supported and sustained within the students’ home environment, there is little lasting impact promoting theatergoing as a lifelong activity. By engaging the entire family and offering repeated exposure through multiple visits, Family First Nights offers the participating families the opportunity to make live, professional theatre part of their cultural heritage. Partner social service agencies are responsible for identifying appropriate families, coordinating family participation, and organizing transportation and other logistics.

THE BROADWAY LEAGUE, founded in 1930, is the national trade association for the Broadway industry. The League’s 700-plus members include theatre owners and operators, producers, presenters, and general managers who present in nearly 200 markets in North America, as well as suppliers of goods and services to the theatre industry. Each year, League members bring Broadway to nearly 30 million people in New York and on tour across the U.S. and Canada. For more information, visit www.BroadwayLeague.com, or follow The Broadway League on Twitter@TheBwayLeague or on Facebook. BROADWAY.ORG is the League’s official on-line headquarters for Broadway in NYC and on tour. Download the free Broadway.org mobile app for iOS or Android, and the free IBDB mobile app foriOS or Android. The Broadway League annually presents the Antoinette Perry “Tony” Awards,® one of the most coveted awards in the entertainment industry, with The American Theatre Wing.