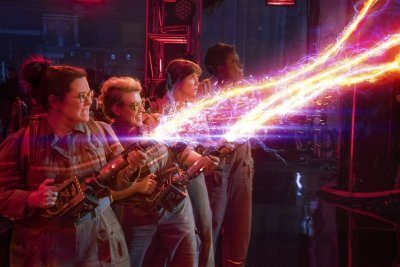 After a couple of decent trailers that actually withheld most of the film’s funniest moments, Ghostbusters arrives with wit, charm, lovable goofiness, some serious melodrama and comes thisclose to being as good as the original.

The all-female Ghostbusters (and their dumber than a sack of flying mallets male receptionist) are worthy successors to Ivan Reitman’s original.

The film opens with a burst of paranormal activity in a famous, supposedly haunted museum (where the tour guide fires off a couple of dandy one-liners (invoking the Irish and elephants – but not together) before closing up for the night and… dun, Dun DUN!!!

Meanwhile, Erin Gilbert (Kristen Wiig) is about to receive tenure at Columbia when she sees a book on ghosts, that she had co-written decades earlier, online – after she thought she had destroyed every copy. 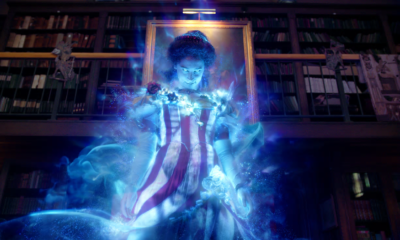 Fearing that she might not get tenure if her boss (Charles Dance) sees it, she headed off to the rinky-dink school where her co-writer, Abby Yates (Melissa McCarthy) has continued her work – with talented by seriously disturbed (in a good way?) engineer Jillian Holtzmann (Kate McKinnon). Abby has managed to fund the pair’s research through a combination of school grants and proceeds from the book.

Before Erin can get much past a near-hysterical tongue-lashing, the trio are approached about the previous night’s supernatural event and Erin finds herself drawn along. There is, of course a ghost – and she gets slimed (that’s in the trailer). Her subsequent actions (which are not in the trailer) turn up on YouTube and get her fired – so, reluctantly, she joins Abby and Jillian.

Following a couple of nice homages to the original, the trio find themselves relocated to a ratty apartment/laboratory above a Chinese food restaurant. There they hire Kevin (Chris Hemsworth) as their receptionist because, dumb as a post or not, he’s the only applicant they’ve got.

Another paranormal event brings New York Metro worker Patty Tolan (Leslie Jones) to them and the team is born. Not only is Patty a walking encyclopedia of the city’s supernatural history, she also provides the new Ecto-1 and knows the subway tunnels like the back of her hand. She may be unschooled, but she is most definitely not stupid. (We get enough of that from Kevin.) 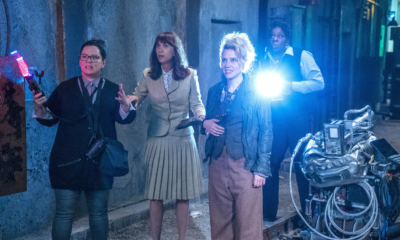 But! It seems that the rise in paranormal occurrences in the city are not natural – there’s a sallow-complected bellman (Neil Casey) at a posh hotel who is also a mad genius – and he’s created devices that will unleash all the ghosts in the city.

Plus the mayor of New York (Andy Garcia) has the team ridiculed as frauds. So, there’s that.

Ghostbusters mixes slapstick, improv and melodrama to great effect – and the music is as close to perfect as possible (they use the original theme, too – you can’t improve on perfection).

While McCarthy and Wiig get slightly more screen time (and are very effective), McKinnon and Jones provide the energy and insanity that create the film’s drive.

McCarthy is, for the most part, restrained (for her) – but gets a couple opportunities to dive into the physical comedy where she excels. Wiig gets to be the straightperson for most of the film, with one or two exceptions (see: the reason she gets fired from Columbia). 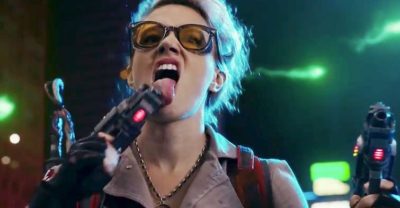 McKinnon’s Jillian is comparable to Bill Murray’s Peter Venkman in terms of off the wall, yet earnest, goofiness. Based on the fun she seems to be having, Ghostbusters should make her a star.

There’s been a lot of press about how wrong it was to cast the film’s one African-American lead as a New York Metro employee working a booth in the underground. I was worried about that going in, but Jones’ Patty is no mere Metro worker putting in time – she’s a fount of information that none of the others can do without – plus she’s tough without being stereotypically ‘sassy’ and provides the audience’s point of view quite nicely.

Hemsworth is almost spectacularly funny as Kevin. His efforts to master the company phone… not to be believed! And a bit about his dog is priceless. He also gets to play the villain for a bit – which lets him show a little of his range.

The surviving cast members from the original have cameos and make the most of them (Bill Murray is particularly good, but Annie Potts, Dan Ackroyd and Eddie Hudson get juicy moments, too).

The CGI effects might have gone over the top a bit in the film’s finale, but I can imagine the 3D (the advance screening of this 3D movie was 2D – not sure why) will make them extremely effective. Happily, the film works very well in 2D.

It should be noted that the film only takes one or two shots at the misogynist idiots who claim an all-female Ghostbusters would ruin their childhoods (I can’t imagine how insecure one would have to be for that to happen – especially since they’ve probably worn out VHS and DVD copies of the original film at home in their mama’s basements, poor babies) – and it’s a good one.

Director Paul Feig has a habit of letting improv take over on his sets and there is a fair bit of improv here. Most of it works – enough that the film has a looser groove than the original, but not so much that it gets tired (though there are a few moments that do crash).

Feig and co-writer Kate Dippold’s take on Ghostbusters did something that’s never happened to me before – while I really enjoyed it at the Monday screening, I find myself appreciating it more and more several days later. It’s stayed with me – a sign that my initial thought for a grade was actually too low.