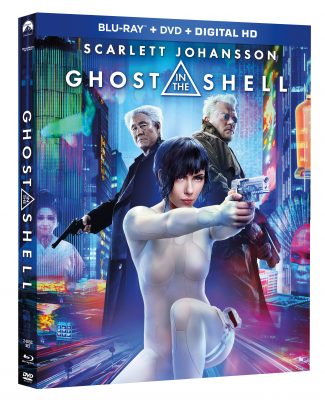 Scarlett Johansson plays The Major in Ghost in the Shell from Paramount Pictures and DreamWorks Pictures – now available on home video, including 4K UHD.

First, the elephant in the room: accusations of whitewashing an Asian lead character.

In terms of the movie, we are talking about a brain being the only human part of the character, so it doesn’t really matter where the brain came from as much as it does that the brain is encased in a completely artificial body.

In terms of casting, though we’re getting closer, there are few (if any) Asian stars who can carry a major motion pictures in North America. That’s not right, but it is the reality – though with more Asian actors beginning to show up on the big screen, it’s only a matter of time before there are Asian actors who can carry a tentpole in North America.

Sanders’ Ghost in the Shell skims through the origin of Major Kira Killian (Scarlett Johannson) – we never see much more than her donor’s hair as she moves along on a gurney. When she awakens in her new body, she is eased into her new life by her creator, Dr. Ouelet (Juliet Binoche).

Her name is now Major Kira Killian and she is delivered to Section 9 – a government agency that deals with cybercrime – to become an agent – at the behest of her boss, Cutter (Peter Fernandando), the CEO of Hanka Robotics.

Within a year, she is their top agent – though she seems to have some issues with authority (regularly going against orders, usually with a successful outcome).

Her team at Section 9 includes: second in command Batou (Pilou Asbæk – with whom Johansson worked on Lucy), Ladriya (Danusia Samal), Togusa (Chin Han), Borma (Tawanda Manyimo), Ishikawa (Lazarus Ratuere) and Saito (Yutaka Izumihara) – who is completely, proudly human in a world where everyone has some sort of ‘enhancement’).

Their new assignment is to track down a cyberterrorist who is killing Hanka Robotics scientists through unique methods (like the hack that gets a robotic geisha to kill a Hanka scientist at a supposedly secure meeting).

With no real leads, Major ‘deep dives’ – sending her mind into the geisha – gaining a lead, but their target, Kuze (Michael Carmen Pitt), almost hacks her.

The philosophical side of the movie that deals with identity – however slightly – is built around the idea that memories don’t define us, only our actions do that. But in a world where everyone is connected in some way to a global communications web, can an identity even be a real thing?

Scarlett Johansson plays the Major and Michael Carmen Pitt plays Kuze in Ghost in the Shell from Paramount Pictures and DreamWorks Pictures.

Is Major, or anyone else who is joined to the net, a human or a machine?

In one confrontation, Kuze accuses Major of being programmed to do what the government wants – which flies in the face of everything we’ve seen to that point in the movie. He may be capable of hacking almost anything or anyone, but he’s not the all-seeing cybergod he wants to be – in fact, he’s not even the real villain of the piece!

This is where the revenge angle comes in – Kuze isn’t just killing Hanka scientists – he’s killing specific ones.

In terms of character development, Sanders’ Ghost in the Shell – written by Jamie Moss (Street Kings) and William Wheeler (Queen of Katwe) – we only really deep dive into Major: a couple of scenes between Johansson and Kaori Momoi add unexpected depth to Major and tie the film to the original manga.

Kuze is only slightly better developed. His motivation for revenge is the only thing that makes him even a bit human – that and his efforts to persuade Major to join him (which has a real payoff…).

Interestingly, Section 9 boss Aramaki (Beat Takeshi) is even more of a cipher than anyone – but Takeshi steals every scene he’s in (partly because he only speaks Japanese and partly because he owns the screen).

In terms of visuals, Sanders’ Ghost in the Shell is considerably more colorful than the other versions – and while it owes something to Blade Runner and The Matrix (which was heavily influenced, in turn, by the anime), it gives us a future Tokyo that hums with life 24/7.

Scarlett Johansson plays the Major and Pilou Asbaek plays Batou in Ghost in the Shell from Paramount Pictures and DreamWorks Pictures.

Electronic billboards and advertising holograms are everywhere; the building look functional as well as cool, and it feels like you step into the city’s street level reality.

Ghost in the Shell may not plumb the philosophical depths of the original (manga or anime), but it doesn’t entirely gloss over them, either.

Thanks to a dazzling performance by Johannson – and some stunning action sequences – Ghost in the Shell is entertaining and even a bit thought-provoking.

Grade: Ghost in the Shell – A-