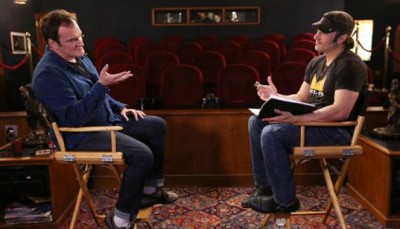 Quentin Tarantino Day kicks off at 10am/9C with Reservoir Dogs; includes Kill bill Vols. 1 & 2 and Django, and concludes with the two-part The Director’s Chair: Quentin Tarantino.

JOIN EL REY NETWORK FOR A KICK-ASS DAY OF PROGRAMMING DURING ‘QUENTIN TARANTINO DAY’BEGINNING SATURDAY, FEBRUARY 20TH AT 10AM ET/PT

El Rey Network is celebrating award winning writer and director Quentin Tarantino this February, so grab your katana, your six-shooter, find a bride, and get ready to get ultra-violent!

To kick off the marathon, El Rey Network is starting bright and early with RESERVOIR DOGS, Tarantino’s first feature length film, and concluding with his two-part feature on EL REY NETWORK PRESENTS: THE DIRECTOR’S CHAIR. DJANGO will also be on the docket, the 1966 spaghetti western that inspired his 2012 movie DJANGO UNCHAINED.

A group of thieves assemble to pull of the perfect diamond heist. It turns into a bloody ambush when one of the men turns out to be a police informer. As the group begins to question each other’s guilt, the heightening tensions threaten to explode the situation before the police step in.

A former assassin, known simply as The Bride (Uma Thurman), wakes from a coma four years after her jealous ex-lover Bill (David Carradine) attempts to murder her on her wedding day. Fueled by an insatiable desire for revenge, she vows to get even with every person who contributed to the loss of her unborn child, her entire wedding party, and four years of her life. After devising a hit list, The Bride sets off on her quest, enduring unspeakable injury and unscrupulous enemies.

The Bride (Uma Thurman) picks up where she left off in volume one with her quest to finish the hit list she has composed of all of the people who have wronged her, including ex-boyfriend Bill (David Carradine), who tried to have her killed four years ago during her wedding to another man. Leaving several dead in her wake, she eventually tracks down Bill in Mexico. Using skills she has learned during her assassin career, she attempts to finish what she set out to do in the first place.

Stranger Django (Franco Nero) rides into the middle of a border fray between Mexican bandits and the Ku Klux Klan.