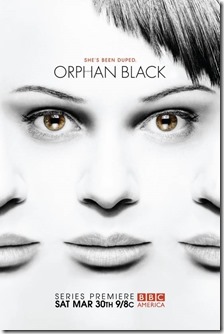 BBC America’s second original scripted series, Orphan Black (Saturdays, 9/8C) combines elements of several genres to create a darkly delightful, twistedly thrilling experience. It follows Sarah Manning, a punky single mother who witnesses a woman who looks exactly like her commit suicide. When she decides to take over the dead woman’s life, she discovers it’s far more complicated than her own.

The teaser for the series premiere episode of Orphan Black – Natural Selection – is the sequence in which Sarah Manning (Tatiana Maslany, Heartland, World Without End) sees a woman who looks exactly like her jump in front of a train after taking off her shows, neatly folding her jacket and setting her purse beside them. While everyone is running to see what happened, Sarah surreptitiously grabs the purse and walks off.

On an impulse, she goes to the woman’s home, where she discovers that Beth has a beautiful apartment, a smoking hot car and an equally hot boyfriend. She also has $75,000 in the bank – money that Sarah thinks she could use to take her daughter Kira (Skyler Wexler) – currently being fostered by the formidable Mrs. S (Maria Doyle Kennedy, Dexter, Titanic the miniseries) – who was her foster mother – and her foster brother Felix (Jordan Gavaris, Unnatural History) and start a new life somewhere/anywhere else. 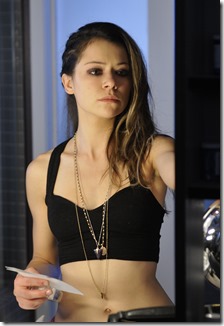 Complications follow almost immediately – Beth was a cop and Sarah finds herself dealing with her partner, Art (Kevin Hanchard, 1-800-Missing, Republic of Doyle) and having to face a hearing for shooting a civilian. Fortunately, she has a bit of an out to cover her mistakes as she tap dances like mad to get her/Beth’s act together – because of the incident, Beth might have suffered Post Traumatic Stress Disorder.

Another, even greater complication is the calls she’s getting from someone who sounds like her/Beth. And, before you know it, she’s meeting two more women who look exactly like her – a soccer mom and an almost scientist (university student). Neither believes that Beth killed herself despite Sarah’s eyewitness account – because there are more identical orphans out there and someone is killing them!

Before you can say ‘Clones!’ Sarah is stuck in Beth’s life and Big Stuff is happening. Despite her really wanting to take Beth’s money and run, a series of incidents changes her mind and she finds herself wondering who she really is, and where she and her sisters – all orphans like her – came from. 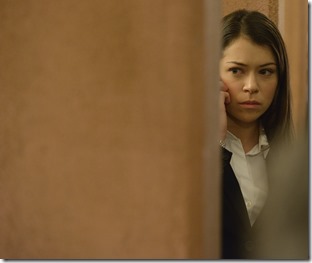 All the while, Art is wondering what’s going on with his partner; Sarah’s ex, the appropriately nicknamed Vic the Dick (Michael Mando, The Colony, Elysium) is after her to get her back (and get back some cocaine she stole from him); Mrs. S. is threatening to not let near her daughter (Sarah disappeared for ten months, so you can kinda see her point), and the problem of Beth’s live-in boyfriend.

Orphan Black is set up as a mystery/thriller based around sci-fi tropes and philosophical ideas. It’s a well-paced hour that builds intriguing, complicated characters and creates several levels on which to operate. There’s the mystery of who’s killing the clones and why; there’s the levels of deceit Sarah builds – both in taking over Beth’s life and in getting Felix to help her fake her own death; there’s the trust (or lack of same) that builds (or not) between Sarah/Beth and her clone sisters – and with Art.

Then there’s the possibility that whatever reasons the sisters have formed about the killer might be wrong – something that builds to a revelation early on in the season (in episode four, in fact) when the killer’s identity is revealed and that person’s reasons come to light. This is also an indication of the levels to the show: if they can reveal the killer this early, then there are people farther up that particular food chain and they might not be operating on the same level of playing field as the sisters. And, too, no one (that they know of over the episodes previewed for review, at least) knows who the original is. It could be one of them; it probably is not. 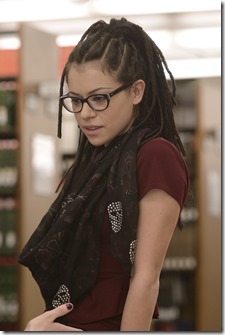 Maslany is awesome as a host of clone sisters – each one has a different accent, personal style and traits and Maslany not only nails them all, she keeps them all straight in the most confusing of circumstances. Garvais is no less compelling for only having one role – Fee (as she calls him) is an out and proud (and swish) gay whose fey affectedness conceals both great intelligence, artistic talent and a backbone made of titanium (figuratively speaking). He is her rock – there’s nothing he won’t do for her (and she for him). They are more truly a brother and sister than a great percentage of blood siblings.

Technically, Orphan Black is a marvel. There is a scene coming in which the three clone sisters are sitting in the room, talking about their circumstances, and it is completely seamless. Series co-creator John Fawcett directed the premiere (and episode two) and he really picks up the superb script (by co-creator Graeme Manson) and does it justice.

Even the series tagline, ‘She’s been duped’ plays to levels the series contains.

One thing: despite Orphan black’s place on BBC America’s Supernatural Saturday schedule following Doctor Who, not all Who fans should be watching this – only the mature ones. This is a series that plays with some heavy intellectual ideas, but the language and occasional nudity/semi-nudity mark is as not being kid-friendly.

Everyone else, though, will likely enjoy it a great deal. It’s the best new series of 2013, so far.