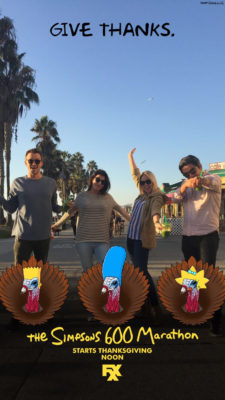 The longest-running marathon in television history, The Simpsons 600, will begin on November 24 (12pm/11am).

The celebrate the event, FXX and Snapchat have devised three Simpsons-themed filters for fans to use beginning Wednesday, November 23rd and running throughout the 13-day marathon. 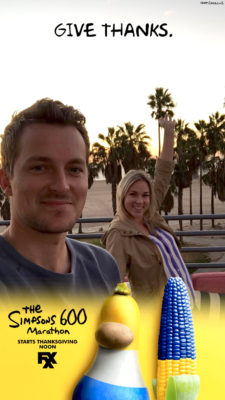 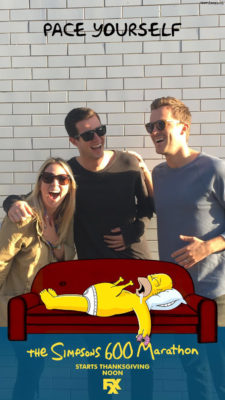 Longest-Running Marathon in TV History Features 600 Episodes of The Simpsons in Chronological Order Beginning Thanksgiving Day, November 24 at 12 PM ET/PT and Concluding December 7 at 12 AM ET/PT

LOS ANGELES, November 22, 2016 –The Simpsons 600 Marathon will celebrate its record-setting run by giving fans new and exclusive The Simpsons-themed Snapchat filters beginning Wednesday, November 23 and throughout the 13-day telecast. The 27-season, 600-episode, 300-hour The Simpsons marathon kicks off Thursday, November 24 at 12:00 PM ET/PT and concludes on Wednesday, December 7 at 12:00 AM ET/PT on FXX.

Beginning November 23, fans will get a chance to use three different Thanksgiving-themed Simpsons filters throughout the day. Then, starting on Thanksgiving when the Simpsons marathon begins, Snapcodes will appear during commercial breaks and across all of FXX’s Simpsons social channels will unlock exclusive The Simpsons 600 Marathon-themed custom filters, which allow users to share that moment with a friend or post it to their Snapchat Story. Featuring seven filters in total, this partnership between FX Networks and Snapchat marks the first time “Snap-to-Unlock” filters have been used across a multi-day television event.

The Simpsons 600 Marathon, which will air every episode of The Simpsons’ 27 seasons in consecutive order, will become the longest-running marathon in television history, surpassing the previous record holder, FXX’s 552-episode, 12-day Simpsons marathon, which ran from August 21, 2014 at 10:00 AM to September 1 at midnight. That marathon propelled the nascent FXX to cable’s #1-ranked network primetime in Adults 18-49 and Adults 18-34 for 12 consecutive days.

Over 150 million people use Snapchat every day (60M in US and Canada) to Snap with family and friends, watch their Stories, and explore content from top publishers and around the world. Snapchatters watch over 10 billion videos per day, up 350%+ in the last year. On any given day, Snapchat reaches 41% of all 18 to 34-year-olds in the U.S. (Nielsen research commissioned by Snapchat).