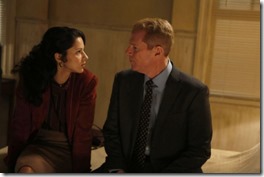 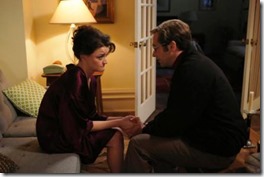 Fans of FX’s family/spy drama The Americans will no doubt be pleased to hear that Annet Mahendru (Nina, left, the Soviet double/triple spy) and Alison Wright (Director Gadd’s secretary/Philip Jennings’ newest wife) have been made regulars for the show’s second season.

PLEDGE ALLEGIENCE TO THE AMERICANS

New York, May 7, 2013 – The Americans will elevate guest stars Annet Mahendru (“Nina”) and Alison Wright (“Martha”) to series regulars for its second season, which is expected to begin production in the fall.  As previously announced, Susan Misner (“Sandra Beeman”) will also be upped to series regular.

“Annet Mahendru has been a revelation as Nina, bringing the character to life with a rich and subtle depth that keeps you guessing as to what’s really percolating under the surface,” said Executive Producers Joe Weisberg and Joel Fields.  “And Alison Wright’s portrayal of Martha is heartbreakingly real at every turn.  We are thrilled to add them to our outstanding company of actors.”

Annet Mahendru will reprise her role as “Nina,” the beautiful and mysterious Russian spy who is intimately involved with FBI Agent Stan Beeman (Noah Emmerich), both personally and professionally. Of East Indian and Russian descent, Mahendru speaks six languages. Her other television credits include 2 Broke Girls, Mike & Molly and Big Time Rush.  She also appeared in the feature films Escape from Tomorrow and Love Gloria.

Alison Wright will return as “Martha,” the delightfully oblivious FBI secretary who has unwittingly married Soviet Directorate S Officer Philip Jennings (Matthew Rhys), believing him to be a Counterintelligence agent named “Clark.”  Wright, who made her television debut with The Americans, began her career at the age of seven, performing in musical theater productions in her native UK.  She appeared in the feature film The Nanny Diaries and is a member of New York’s Barrow Group Theatre Company.

Set in 1981 just after Ronald Reagan is elected president, The Americans, starring Keri Russell, Matthew Rhys and Noah Emmerich, is a drama series about the complex marriage of two KGB spies posing as Americans in suburban Washington D.C. Created and executive produced by Joe Weisberg (Falling Skies), a former CIA agent who went on to become an accomplished author, The Americans is produced by Fox Television Studios and FX Productions. Joel Fields and Graham Yost are also executive producers, along with Amblin Television heads Justin Falvey and Darryl Frank.  The most critically acclaimed new show of the year, The Americans recently concluded its freshman season.

Fox Television Studios produces scripted and unscripted programming for US broadcast and cable networks, and international broadcasters. Series include the breakout hit The Americans, starring Keri Russell and Matthew Rhys, for FX, already renewed for season two; the hit shows Burn Notice and White Collar, both for USA; the Emmy-nominated The Killing, returning to AMC for a third season in June 2013; The Glades, in season four for A&E; as well as the upcoming series Graceland, from White Collar creator Jeff Eastin, for USA; and Maron, a fictionalized look at the life of comedian and podcast host Marc Maron, for IFC. Unscripted series include the upcoming Life Flight for TNT, among others. FTVS also has several pilots in development, including Sirens for USA, written by Denis Leary and Bob Fisher who executive-produce along with Jim Serpico (project is from Leary and Serpico’s Apostle and Fox TV Studios); Rita, starring Anna Gunn (Breaking Bad) for Bravo; and Line of Sight for AMC.

FX Productions produces the critically acclaimed hit comedy series It’s Always Sunny in Philadelphia, The League, Louie, Archer, Wilfred, and Legit, and the late night series Brand X with Russell Brand and Totally Biased with W. Kamau Bell. FXP co-produces the award-winning hit drama series Sons of Anarchy and Justified, and the critically acclaimed drama The Americans and the upcoming drama series The Bridge.  FXP currently has production output deals in place with RCG Productions, the production company of It’s Always Sunny in Philadelphia Executive Producer/Showrunners Rob McElhenney, Charlie Day and Glenn Howerton, and Floyd County Productions, the production company of Archer Executive Producer/Showrunners Adam Reed and Matt Thompson. FXP recently announced a cable exclusive, first-look pact with Nina Jacobson, Brad Simpson and their Color Force production company, producers of the Diary of a Wimpy Kid feature franchise and The Hunger Games. It was the first POD deal for FX Productions that was not established through a prior existing relationship with the studio.  FXP has a first-look cable deal with Paul Giamatti, Dan Carey and their production company, Touchy Feely Films. FXP is also producing limited series and miniseries for FX and FOX.

FX is the flagship general entertainment basic cable network from Fox. Launched in June of 1994, FX is carried in more than 98 million homes. The diverse schedule features a growing roster of critically acclaimed and award-winning hit dramas series, including Sons of Anarchy, Justified, The Americans, and the upcoming drama series The Bridge (July 2013); the miniseries American Horror Story; and the acclaimed hit comedy series Louie, Archer and  Wilfred. The network’s library of acquired box-office hit movies is unmatched by any ad-supported television network. FX’s roster of acquired hit series includes Two and a Half Men, Anger Management and, coming in 2014, Mike & Molly.