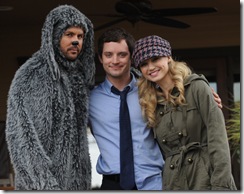 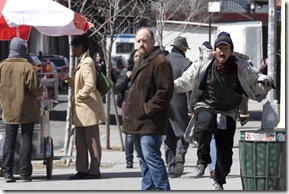 Wilfred begins with Ryan [Elijah Wood] typing at his computer. ‘Nailed it!’ he exclaims and, as the camera moves to show the computer screen we read ‘Suicide Note [Third Draft]. As Ryan tries to figure out the best way to commit suicide, the doorbell rings. It’s his neighbor, Jenna [Fiona Gubelmann], asking if he could dogsit her pet, Wilfred [Jason Gann] – who looks to Ryan like the aforementioned Australian guy in a cheap dog suit.

When Wilfred begins to talk to him, Ryan has the human reaction – he freaks out. However, Wilfred seems to be a bright fellow in a cheap dog suit [I love that!] and it isn’t long before he’s figured out that Ryan was suicidal. Events lead to a Fourth Draft of the suicide note, but Wilfred provokes some thought when he asks Ryan if he’s happy [the premiere is titled Happiness – and if not, why not.

The premiere also introduces Ryan’s sister, Kristen [Dorian Brown], who had lined up a job for him in the hospital where she works [she’s both a doctor and a bully], and a large biker neighbor whose muffler-free motorcycle is only one his unendearing traits.

Two other episodes included on the screener have the titles Trust and Fear. Each begins with a quote – Happiness opens with one from Mark Twain, ‘Sanity and happiness are in impossible combination.’ Each also centers on some aspect of Ryan’s life that is making him miserable and Wilfred’s upsetting of the norms in that life.

We are left to wonder if Ryan is going crazy, or if some cosmic fluke has caused him to actually perceive Wilfred in a way that no one else can. Whether Ryan is nits or not, Wilfred’s entreaties do seem to have an impact on his life – usually for the better, but not always.

Wilfred is actually unique – there is nothing else like it on North American television. Although based on an Australian series created by Gann [who also played Wilfred in the original], the FX version is more densely plotted and much smarter – if, at heart, just as winningly absurd. It is, without doubt, the funniest series of the summer.

Louie, on the other hand, is very grounded in reality. Written, directed and edited by – and starring Louie CK, the show is almost a hit and run experience that combines short bursts of Louie’s stand-up act with slices of life that range from ten to twenty minutes.

The second season premiere, Pregnant, finds Louie discussing the problems of having daughters who are five and nine-years old – and being visited by his pregnant sister. The humor ranges from the world’s oddest fart joke to a part of Louie’s stand-up act that revolves around the simultaneous love of his children and the almost homicidal frustration they can provoke in him.

In upcoming eps Louie talks about how, as an average-looking guy, there’s a ‘whole spectrum of women that he just doesn’t have access to’ – and scoring a date with a very pretty acquaintance that takes an odd twist when he witnesses a fatal accident [Bummer/Blueberries]; thinks about buying a $17 million townhouse for his family and then looking at more realistic options [Moving] and playing a lounge in a Vegas casino – and getting schooled by Joan rivers [Joan].

What makes Louie CK funny is that he is brutally honest – about himself, his family, life in general – pretty much about everything. Because he is an average-looking guy, his intelligence and flashes of insight don’t come across as pontificating so much as empathetic. He lays out his life in a way that we not only feel empathy with him, we feel that he empathizes with us.

Louie [the series] always feels off the cuff, like it’s actually happening as we watch. Actually, it’s all scripted and with Louie doing the writing, editing and direction, what we are getting is exactly what he wants us to see. Since we see exactly what he wants us to see, he could be something/someone entirely different, but such is his talent for finding the truth of things – and expressing it in a completely accessible way [if you don’t care for vulgar language, skip this series] – that we know that he is being honest with us. Possibly too honest – Louie often seems to present us with too much information – but that occasional [?] excess only adds to his believability.

Insofar as Louie takes real life and riffs on it to extremes, it could be considered almost as weird in its grounding as Wilfred is in its surreality. It certainly makes a fitting companion for an evening of deranged humor.

Once again, Thursday has a hour of must-see TV!