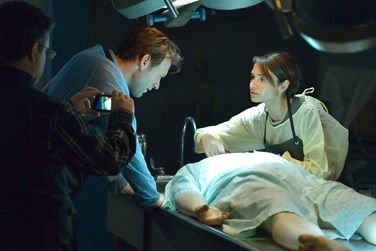 FX’s hit horror series The Strain has been picked up for a second season. The critically acclaimed series (Eclipse gave it an A+) takes the idea of horrific, not sparkly and tormented, vampires and amps it up to creepy new heights by emphasizing its implacable, disease-like elements. The news of the show’s renewal comes with seven episodes yet to air in its debut season.

Season One of The Strain will be released on DVD And Blu-Ray on December 2nd. For further details, follow the jump.

The Strain Recorded the Most-Watched Series Premiere in FX History with 12.7 Million Viewers

LOS ANGELES, August 19, 2014 – FX has ordered a 13-episode second season of its newest hit drama series The Strain from Guillermo del Toro and Carlton Cuse, it was announced today by John Landgraf, CEO, FX Networks and FX Productions. Season 2 of The Strain is scheduled to debut in the summer of 2015. There are seven all-new episodes remaining in Season 1 airing Sundays at 10 PM ET/PT on FX.

The Strain marks the first time FX has aired an original series on Sunday night and the move has shown its mettle, ranking as the #1 new series on cable (broadcast or premium) in 2014 in delivery of Adults 18-49. The series also recorded the most-watched series premiere in FX history with 12.7 million Total Viewers, which surpassed the network’s initial projection of 10 million Total Viewers. The Strain is the first drama series produced solely by FXP (FX Productions).

Due to the popularity of the show, Fox Home Entertainment will release Season 1 of The Strain on DVD and Blu-ray™ everywhere on December 2.

"We’ve never had any doubts about The Strain," said John Landgraf. "Working with Guillermo del Toro, Carlton Cuse, and the brilliant cast led by Corey Stoll has been everything we had hoped it would be and more.  It is thrilling when you have a show that is a creative and commercial hit, which is a rare accomplishment in this increasingly crowded marketplace. We look forward having it on FX for as long as Carlton, Guillermo and Chuck Hogan need to tell this epic tale."

"I am thrilled!  Another season to spread the virus!” said del Toro, who directed the pilot and co-wrote the best-selling books The Strain with Chuck Hogan.  “Working with Carlton, Chuck and FX has been immensely rewarding and we have such sights to unveil in the upcoming episodes—the blood hits the fan on this one, mankind becomes an endangered species."

Cuse said, "It’s been immensely satisfying over the last year-and-a-half to work with the incredible team at FX, Guillermo del Toro and Chuck Hogan to bring The Strain to life.  I am grateful for all the blood, sweat and tears (but mostly blood) given to the project by all involved, and I could not be more excited to continue telling this epic story."

The first six episodes of The Strain are currently available on FX’s VOD platform FXNOW for authenticated subscribers of the network, and future episodes will be available after they air on FX.

In next week’s 7th episode, “For Services Rendered” (airs this Sunday, August 24 at 10:00 PM ET/PT), Setrakian, Eph, and Nora formulate a plan to track down the Master using Jim as bait. Eichhorst and Setrakian’s pasts are revealed. At the Luss home, Neeva struggles to protect the children while encountering a mysterious stranger whose help she may not want. Teleplay by Bradley Thompson & David Weddle; directed by Charlotte Sieling.

The Strain is a high concept thriller from Co-Creators, Executive Producers and Writers Guillermo del Toro and Chuck Hogan. The series, starring Corey Stoll, David Bradley, Mia Maestro, Sean Astin, Kevin Durand, Natalie Brown, Jonathan Hyde, Richard Sammel, Jack Kesy, Ben Hyland and Miguel Gomez, tells the story of “Dr. Ephraim Goodweather” (Stoll), the head of the Center for Disease Control Canary Team in New York City. Goodweather and his team are called upon to investigate a mysterious viral outbreak with hallmarks of an ancient and evil strain of vampirism. As the strain spreads, Eph, his team, and an assembly of everyday New Yorkers, wage war for the fate of humanity itself. Emmy® Award winning Writer and Producer Carlton Cuse serves as Executive Producer, Showrunner and Writer. Guillermo del Toro is Executive Producer and he Directed the Pilot episode. Chuck Hogan is Executive Producer and Writer. Gary Ungar also serves as Executive Producer.

Guillermo del Toro and Cuse are represented by WME.

FX is the flagship general entertainment basic cable channel of FX Networks, a business unit of Fox Networks Group. FX Networks is comprised of FX, FXM and FXX, its newest channel, which debuted on September 2, 2013. Launched in June of 1994, FX is carried in more than 95 million homes. The diverse schedule features a growing roster of critically-acclaimed and award-winning hit dramas series, including Sons of Anarchy, Justified, The Americans, The Bridge, Tyrant and The Strain; the miniseries American Horror Story; the critically-acclaimed limited series Fargo; the acclaimed hit comedy series Louie and Archer; and scripted comedies Married and You’re The Worst, and recently ordered The Comedians and Sex&Drugs&Rock&Roll. The network’s library of acquired box-office hit movies is unmatched by any ad-supported television network. FX’s roster of acquired hit series includes Two and a Half Men, Anger Management and, coming in 2014, Mike & Molly.?