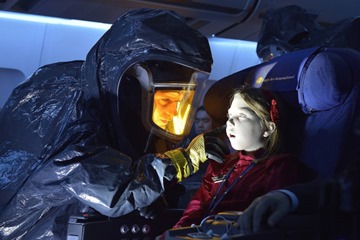 FX has partnered with Xbox Video to make a host of extras based on its new series, The Strain, available exclusively through that platform.

LOS ANGELES, July 11, 2014 – FX Networks is teaming with Xbox Video to offer an exclusive experience tied to the series premiere of the highly anticipated drama, The Strain.  From Academy Award® nominated filmmaker Guillermo del Toro, author Chuck Hogan and writer/producer Carlton Cuse, The Strain is based on the best-selling vampire novel trilogy of the same title written by del Toro and Hogan.

FX partnered with Xbox Video to deliver a package of custom teasers, art, photography, custom behind-the-scenes videos, a Guillermo del Toro Fan Q&A, and an exclusive scene from the pilot available now only on Xbox One® and Xbox 360®. The assortment of exclusive offerings to Xbox users will enhance their onscreen experience of FX’s newest drama.

The Strain is a high concept thriller that tells the story of Dr. Ephraim Goodweather (Corey Stoll), the head of the Center for Disease Control Canary Team in New York City. He and his team are called upon to investigate a mysterious viral outbreak with hallmarks of an ancient and evil strain of vampirism. As the strain spreads, Eph, his team, and an assembly of everyday New Yorkers wage war for the fate of humanity itself.

FX is the flagship general entertainment basic cable channel of FX Networks, a business unit of Fox Networks Group. FX Networks is comprised of FX, FXM and FXX, its newest channel, which debuted on September 2, 2013. Launched in June of 1994, FX is carried in more than 97 million homes. The diverse schedule features a growing roster of critically-acclaimed and award-winning hit dramas series, including Sons of Anarchy, Justified, The Americans, The Bridge and Tyrant; the upcoming drama series The Strain (July 13, 2014); the miniseries American Horror Story; the critically-acclaimed limited series Fargo; the acclaimed hit comedy series Louie and Archer; and scripted comedies Married and You’re The Worst both launching July 17, 2014. The network’s library of acquired box-office hit movies is unmatched by any ad-supported television network. FX’s roster of acquired hit series includes Two and a Half Men, Anger Management and, coming in 2014, Mike & Molly.