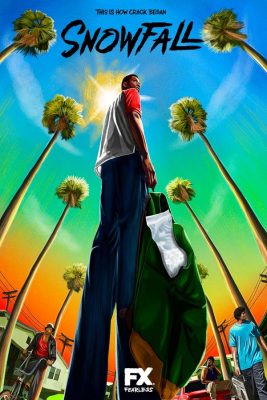 Snowfall, the FX series about the beginnings of the crack epidemic in Los Angels, has been picked up for a second season thanks to a combination of critical acclaim and ratings.

Snowfall Picked Up For Second Season

LOS ANGELES – August 9, 2017 – Snowfall has been renewed for a second season, it was announced today by Eric Schrier and Nick Grad, Presidents of Original Programming, FX Networks and FX Productions. The drama about the start of the crack epidemic in Los Angeles will return to FX for its second season in 2018.

Snowfall returns tonight with Episode 6 at 10 PM ET/PT on FX – “A Long Time Coming:” Franklin turns to Jerome for guidance, resulting in an unexpected encounter. Teddy contemplates a different future for his family. Gustavo and Lucia enlist business partners from Gustavo’s past. Written by Tatiana Suarez-Pico; directed by Michael Lehmann.

Los Angeles 1983. A storm is coming and its name is crack. Snowfall is a one-hour drama set against the infancy of the crack cocaine epidemic and its ultimate radical impact on the culture as we know it. The story follows numerous characters on a violent collision course, including: Franklin Saint (Damson Idris), young street entrepreneur on a quest for power; Gustavo “El Oso” Zapata (Sergio Peris-Mencheta), a Mexican wrestler caught up in a power struggle within a crime family; Teddy McDonald (Carter Hudson), a CIA operative running from a dark past who begins an off-book operation to fund the Nicaraguan Contras and Lucia Villanueva (Emily Rios), the self-possessed daughter of a Mexican crime lord.

“FX’s riveting new show Snowfall shows us a whole different side of LA….Franklin ‘Saint’ is played by the captivating Damson Idris”

” a confident vision and compelling atmosphere from the get-go”

“Breakout Actor: Damson Idris…. It was truly breathtaking to watch—and he stood out against the more veteran actors, who were all pretty darn great.  We can’t wait to see what he does next”

“Snowfall does have a great deal to offer, not the least of which is the promise of staggering payoff in the last four episodes”

” Snowfall is compelling viewing…. A program with intriguing characters that tell a taught and engrossing story, Snowfall is a promising new FX series”

“Snowfall Has The Potential To Be A Sleeper Summer Hit For FX…. this scrappy, bright, and slow-burn drama makes for a far more interesting watch and a great summer show…. a highly watchable show that is unafraid to get dirty and unwilling to needlessly glamorize 1980s LA. With its excellent cast, drifting tone, and drug-filled dramatics, Snowfall has the potential to be FX’s sleeper summer hit”

“Just Say Yes To Snowfall….It’s a fascinating panoramic look at the drug trade – and the world it created”

“Snowfall, the ambitious new drama from John Singleton, is another winner for FX….the series

never neglects to be entertaining…. [Damson] Idris, [Emily] Rios and [Carter] Hudson all offer nuanced portrayals….the series boasts an excellent cast top to bottom, including Michael Hyatt as Franklin’s well-meaning mother and Amin Joseph as hisuncle….In a crowded field of good television, the series manages to distinguish itself.”

“full of twists, confrontations and danger….it’s no surprise that Snowfall is projected to be a runaway hit….the breakout star of the series, Damson ldris…. The rest of the vibrant cast is

“GREAT ENSEMBLE ELEVATES SNOWFALL ABOVE STANDARD CRIME DRAMA…. FX continues their remarkable 2017 with the summer drama Snowfall, a series that doesn’t so much remold the template for the drug-fueled drama as much as allow very well-drawn and well-performed characters to play within it…. [Damson] Idris is a fantastic find, conveying a combination of intelligence and innocence that makes Franklin’s arc feel genuine”

“An Ambitious Summertime Series…. a visually striking series with plenty of strong performances, from [Damson] Idris to the always-reliable [Emily] Rios (Breaking Bad, The Bridge), and especially Michael Hyatt”

“Snowfall is an ambitious and risk-taking addition to the [gangster] genre….” The fictional series tells that grim story with a bravura energy that recalls films by Martin Scorsese and Spike Lee. The more outlandish moments bring to mind Scarface and Pulp Fiction….Snowfall demonstrates breathtaking promise and style… John Singleton, Dave Andron and Eric Amadio – deliver an epic look at society yet keep it personal. The large cast, filled with many unfamiliar faces, is uniformly excellent….

” There’s something compulsively watchable about it, and I expect it to be a big hit, if only because it’s telling a story unlike any other on TV…. inside its [Snowfalls] veins runs something vital and alive and different — at once indebted to its inspirations and ready to find a way to transcend them”

“thoroughly compelling…. once again an FX series artfully demonstrates the narrative discipline it takes to launch a story with multiple characters and perspectives…. Snowfall is lean, mean and precise….it belongs on everyone’s must-watch list this summer”