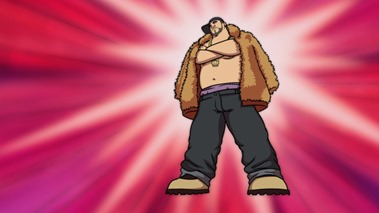 Beginning today, owners of the Xbox One gaming system can watch an exclusive sneak peek of FX’s new animated series, Chozen, about a gay white rapper fresh out of prison. The sneak peek of the series, which premieres on Monday, January 13 (10:30/9:30C), can be accessed through the FXNOW app.

LOS ANGELES, January 6, 2014 – FX Networks is teaming with Xbox One to offer an exclusive sneak peek of the pilot episode of its newest animated comedy, Chozen, through the FXNOW app beginning Monday, January 6. The 13-episode series premieres Monday, January 13 at 10:30 PM ET/PT on FX, following all-new episodes of the critically-acclaimed comedy Archer.

Chozen is an animated comedy about its title character, “Chozen,” a gay white rapper fresh out of prison. Armed with a new message, Chozen is on a quest for redemption and to claim his rightful position as the world’s top rap artist. His music and lyrics take aim at the stereotypes of machismo and misogyny that is synonymous with rap music. And his new world view has been shaped by his time in prison.

The FXNOW app for Xbox One app offers the biggest and best lineup of FX, FXX and FXM’s critically-acclaimed dramas, hit comedies and blockbuster movies within an Xbox One experience that’s unmistakably FX. Featuring easy to use navigation that seamlessly integrates built in voice and gesture controls with Kinect, the FXNOW app allows Xbox Live Gold members on Xbox One who are customers of AT&T U-Verse, Comcast, Cablevision, Suddenlink and WOW to watch full episodes and movies on-demand anytime, and enjoy bonus clips and other exclusive content.

FX is the flagship general entertainment basic cable channel of FX Networks, a business unit of Fox Networks Group. FX Networks is comprised of FX, FXM and FXX, its newest channel, which debuted on September 2, 2013. Launched in June of 1994, FX is carried in more than 97 million homes. The diverse schedule features a growing roster of critically-acclaimed and award-winning hit dramas series, including Sons of Anarchy, Justified, The Americans and The Bridge; the miniseries American Horror Story; and the acclaimed hit comedy series Louie, Archer and Chozen. The network’s library of acquired box-office hit movies is unmatched by any ad-supported television network. FX’s roster of acquired hit series includes Two and a Half Men, Anger Management and, coming in 2014, Mike & Molly.