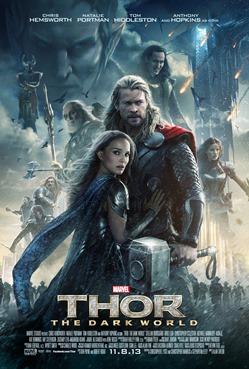 That Didn’t Take Long Department: Thor: The Dark World has barely completed its North American debut weekend and we already know where it’s going to premiere on commercial TV – FX Networks. FX has just announced it has acquired the Marvel superhero blockbuster – the latest in a long list of 2013 theatrical hits for which they’ve obtained commercial television premiere rights that includes Gravity, Prisoners and Captain Phillips.

LOS ANGELES, November 11, 2013 — FX Networks continues to throw down the hammer on acquiring top theatrical films, most recently claiming the commercial television premiere rights to Thor: The Dark World – the #1 grossing film at the box office this weekend, raking in $86 million.  Thor: The Dark World, part of the successful output deal between FX Networks and Marvel, will be available to the FX suite of channels beginning in 2015.

FX Networks has dominated the fall season, locking in an impressive and diverse roster that includes the critically acclaimed Gravity and Captain Phillips, and the hit films Jackass Presents: Bad Grandpa, Cloudy with a Chance of Meatballs 2, and Prisoners.

Continuing its banner year, FX has acquired eight of the Top Ten biggest box-office hits and roughly two thirds of the Top 30 films in 2013.  In addition, films acquired by FX Networks have finished #1 at the box office in 30 of 45 weeks in 2013.

The Top Ten grossing films of 2013 acquired by FX Networks includes Iron Man 3, which stands #1 (with over $400 million dollars to date), Despicable Me 2, Man of Steel, Fast and Furious 6, Star Trek Into Darkness, World War Z, Gravity, and The Croods.

In addition to Thor: The Dark World, FX’s other major title acquisitions to have claimed the top spot at the box office this year, and to have grossed over $100 million, include The Heat, Identity Thief, Grown Ups 2, The Wolverine, The Hangover Part III, Pacific Rim, and Cloudy with a Chance of Meatballs 2.

FX Networks has the largest library of acquired theatrical films and the most commercial television premieres of any television service.  FX Networks’ suite of channels – FX, FXX and FXM – features movies across all genres in primetime and all dayparts.

FX Networks, a business unit of 21 Century Fox, is comprised of FX, FXM, and its newest channel, FXX, which launches on September 2, 2013. Launched in June of 1994, FX is the flagship general entertainment basic cable channel, which is carried in more than 97 million homes. Its diverse schedule features a growing roster of critically-acclaimed and award-winning hit dramas, including Sons of Anarchy, Justified, The Americans, and critically acclaimed new drama The Bridge; the miniseries American Horror Story; and the acclaimed hit comedy series Louie, Archer and . Its library of acquired box-office hit movies is unmatched by any commercial television network. FX’s roster of acquired hit series includes Two and a Half Men, Anger Management and, coming in 2014, Mike & Molly.  Launched in September of 2013 and is carried in more than 72 million homes FXX features original series, movies, and acquired series. The channel is anchored by the acclaimed hit comedies It’s Always Sunny in Philadelphia, The League, Legit, and Wilfred the critically acclaimed latenight strip, Totally Biased with W. Kamau Bell.  FXM was launched in October of 1994 and is now carried in more than 49 million homes. Its schedule features classic films during the day, and contemporary box office hits and acclaimed, award-winning films in the evening, as well as short-form award-winning original programming.  Over the next several years, FX, FXX and FXM will undergo an ambitious programming expansion, with the three networks combining to deliver more than 25 original scripted series.