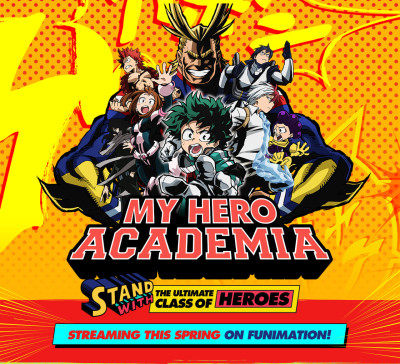 Funimation Entertainment’s My Hero Academia follows the adventures of  Izuku – who was unlucky enough to be born completely normal in a world where eighty per cent of the population has some kind of super powers.

Since he was a kid, Izuku has wanted to be hero and now he has, somehow, managed to get enrolled in one of the world’s most prestigious hero academies. How will he survive the experience, let alone become a hero?

My Hero Academia – which debuted on April 3rd on funimation’s streaming service – will now also stream on Hulu. New subtitled episodes will air each Sunday at 5 am (4C) on both the Hulu and Funimation streaming services. Follow the jump for more.

FLOWER MOUND, TEXAS – April 15, 2016. Funimation Entertainment announced today that its new series “My Hero Academia,” which premiered on April 3, will now be available to stream on Hulu.  New subtitled episodes of “My Hero Academia” will air each Sunday at 5:00 AM Eastern Time on both the Hulu and Funimation streaming services.

The “My Hero Academia” anime series is based on the New York Times bestselling, super hero manga series of the same name, which currently sits at more than 3.7 million copies in print worldwide since debuting in Shonen Jump less than 2 years ago. The new TV series is being produced by the acclaimed studio Bones, which has been the force behind numerous international anime hit series like ‘Fullmetal Alchemist,’ ‘Cowboy Bebop,’ ‘Soul Eater’ and ‘Space Dandy.’ A trailer for the series is available here.

“Our partnership with Hulu helps extend the reach of ‘My Hero Academia’ making it even more accessible for current and new fans alike,” said Mike DuBoise, EVP and COO of Funimation. “Based on fan response to both the anime and manga series, I have no doubts that ‘My Hero Academia’ will be a major franchise for years to come.”

There’s a new hero in town – “My Hero Academia,” a superhero origin story that soars to the top of the class!

For more about “My Hero Academia,” visit http://www.funimation.com/myheroacademia.

“My Hero Academia” on Hulu: http://www.hulu.com/my-hero-academia.