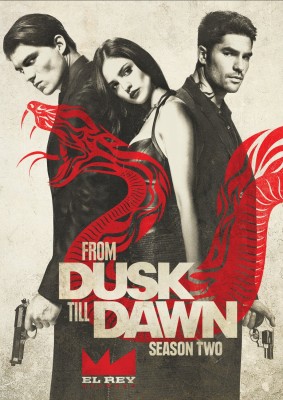 Season Two finds the Brothers Gekko at odds and apart.

Seth (D.J. Cotrona) is holed up in a seedy motel with good Christian girl, Kate (Madison Davenport), surviving from day to day by pulling small jobs (which also serve to feed his new drug habit) – while also trying to protect Kate (when it seems more like she’s protecting him). Being Seth, though, he constantly reacts in a more visceral way to the problems that crop up.

Richie (Zane Holtz), of course, is now a culebra and has thrown in with his maker, Santanico Pandemonium (Eiza Gonzalez), to destroy the culebra lords who made her unlife an unliving hell. Being Richie, he thinks too much and it sometimes causes problems.

Season two introduces Lord Molvado (Esai Morales), a businessman with a heart of coal and a tendency to wreak havoc when he feels he must. He’s got a huge operation, but even the collections at the Titty Twister are small change compared to what he’s looking for – the blood of a thousand souls who were tricked into sacrificing themselves to destroy the lords. That blood has power and he wants it all for himself.

When things go awry for Molvado, he brings The Regulator (Danny Trejo) – a sort of supernatural hitman/bounty hunter – to life to take care of them.

The need for new papers leads Seth to Sonja (Brianne Evigan), a tattoo artist with a profitable sideline in fake IDs (including really good passports). At the same time, Kate is still looking for a way to save her adoptive brother, Scott (Brandon Soo Hoo).

Sex Machine (Jake Busey) is back, too – minus the junk drawer derringer since his junk back when he became a culebra. He’s putting together the map Molvado needs to find the blood (but has his own plans…).

As for Carlos (Wilmer Valderama), he’s of the opinion that the Mayans chose the wrong Spaniard to worship as a god and has his own plans for becoming one. And… he has a girlfriend…

We even learn about the man who taught the Gekko Brothers everything they know – Uncle Eddie (Jeff Fahey), and he has a pivotal role in the brothers’ season arc.

Ranger Freddie Gonzalez (Jesse Garcia) has a fun arc, too, as it turns out that he has a closer relationship to the lords and their… let’s call it a blood bank. We also discover that his mentor, Earl (Don Johnson), played a key role in preventing wholesale slaughter by the lords – earning the nickname Peacekeeper (a role into which Gonzalez grows).

The cool thing about FDTD:TS is that it uses Mezzo-American mythology by fusing it with pulp fiction style to create something that’s actually fresh. Also, the show is layered so that you can it enjoy it for its pulpy surface layer, its mythological underpinnings, or for the intriguing characters.

The season is filled with weird humor, creepiness, nastiness and blood – yet never loses the sense of hope that keeps its main characters moving forward.

There are great moments throughout the season, but the one that may be the most pure fun is when Seth and Richie take Eddie’s advice to ‘eat about it.’ The idea is that they sit down to a meal and over some quality grub, they work out their differences. In this case, things are also complicated by the presence of Sonja and Santanico (who have their own private encounter).

For an action/horror series, FSTD:TS has a lot of really good character stuff. By the end of the season, we know and like (or loathe) the character as much for who they are as for what they’re doing.

Technically, the series gets a lot of bang out of a moderately low budget (Rodriguez is not one to be overly indulgent) and the series looks really good. The cast are all having a great time and you can tell –they’re very, very good (even in the smallest roles). Like its pulp influences, the series moves like a bat out of hell – if you blink, you might miss something cool.

Bonus materials include commentary tracks on the first and last episodes (Opening Night and Santa Sangre) by all principal participants (director Robert Rodriguez, D.J. Cotrona, Zane Holtz, Madison Davenport, Brandon Soo Hoo, Eiza Gonzalez and Wilmer Valderama); Ten Inside The Episode featurettes, and fifteen Behind the Scenes featurettes (the Inside the episode featurettes are barely a couple minutes each and just scratch the surface, but they’re fun; the Behind the Scenes featurettes are a bit longer).

Grade: From Dusk Till Dawn: The Series: Season Two – A