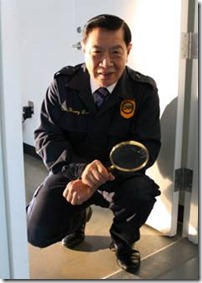 Modern methods of crime fighting owe much to Sir Arthur Conan Doyle’s fictional ‘World’s first consulting detective,’ Sherlock Holmes. From his method of deduction to his use of blood spatter, fingerprints and studies of such things as the types of cigar and cigarette smoke, Holmes inspired methods now used around the world in the pursuit of criminals.

This fall, the PBS special, How Sherlock Changed the World will trace the path from Conan Doyle’s fictional detective to the modern forensics labs of Scotland Yard and the FBI. For details on the special, follow the jump.

EXPLORES THE IMPACT OF THE LEGENDARY DETECTIVE ON CRIMINAL INVESTIGATION

PASADENA, CA; JANUARY 14, 2013 – Today at the Television Critics Association meeting, PBS announced the premiere of HOW SHERLOCK CHANGED THE WORLD, a two-hour special about the world’s most legendary fictional detective — Sherlock Holmes. The special will reveal for the first time the astonishing impact that Holmes has had on the development of real criminal investigation and forensic techniques. The program is slated to premiere in fall 2013 on PBS.

Sherlock Holmes is, without doubt, the most famous fictional detective the world has ever known. HOW SHERLOCK CHANGED THE WORLD will show that Conan Doyle’s hero not only revolutionized the world of fiction, but also changed the real world in more ways than many realize. Holmes was a scientist who used chemistry, fingerprints and bloodstains to catch an offender in an era when eyewitness reports and “smoking gun” evidence were needed to convict criminals, and police incompetence meant that Jack the Ripper stalked the streets freely. In many ways, the modern detective can be seen as a direct extension of Conan Doyle’s literary genius.

‘We are delighted to bring this exclusive special about Sherlock Holmes to PBS,’ said Beth Hoppe, Chief Programming Executive and General Manager of General Audience Programming for PBS. ‘HOW SHERLOCK CHANGED THE WORLD takes Conan Doyle’s creation from fiction to reality, revealing the real-life importance of Holmes as a revolutionary crime fighter.’

‘It is clear, especially of late, the lasting impact that Holmes has had, both nationally and internationally,’ added Trish Powell, Executive Producer at Love Productions, the studio behind the special. ‘The worldwide success of the BBC drama on MASTERPIECE MYSTERY! and recent box-office hits Sherlock Holmes and Sherlock Holmes: Game of Shadows have proven Holmes to be a timeless source of entertainment. With this recent resurgence of interest, it is a perfect time to present this Sherlock Holmes special that demonstrates how the character was a catalyst for meaningful advancement and change in the field of criminal investigation and forensic science.’

Through the use of compelling archival material and reconstruction, HOW SHERLOCK CHANGED THE WORLD tells the true stories of the scientists, detectives and even criminals who were inspired or influenced by the legend of Holmes. The program explores real crimes that were solved thanks to a piece of equipment Holmes used, a technique he popularized or invented, or even his method of reasoning. The special will also assess the history of Holmes’ techniques from the 1880s to the present, showing how the scientific techniques Holmes introduced to the world have evolved into the stunning CSI-style forensic labs of Scotland Yard and the FBI.

‘Sherlock Holmes is the grandfather of forensic science,’ states top forensic scientist Dr. Henry Lee. ‘Today when I go to a crime scene I use his logic, his method of deduction. That’s how we do it today, solving cases based on Sherlock Holmes’ logic.’

HOW SHERLOCK CHANGED THE WORLD will demonstrate how the legacy of Holmes, as the first crime profiler, was not solely a reservoir of brilliant stories and wonderfully drawn characters, but that it has saved lives and led to the capture of some of the worst criminals in modern history.