Letters of Transit takes its title from a key element of the film Casablanca – and there actually are similar documents in this strangest episode of Fringe’s fourth season.

The world has been taken over by the Observers, who do not take kindly to those who might wish to resist their rule – but resist, some brave humans do. There is a special police force to deal with ‘native’ actions against the Observers, but a remnant of Fringe division still exists to police ‘native on native’ violence.

A young Fringe agent named Etta [Georgina Haig] and an older agent named Simon Foster [Henry Ian Cusick] seem to be the most effective members of the resistance – and she has discovered something that could turn the tide against the Observers. Unfortunately, time – and some forms of technology – are not on their side.

Oddly enough, there’s not really much more I can say about the events of Letters of Transit without giving up at least a few juicy spoilers – except to say that we see some different versions of Broyles [Lance Reddick] and Nina Sharp [Blair Brown] as well as a more familiar Peter [Joshua Jackson]and Astrid [Jasika Nicole] and yet another version of Walter [John Noble]. 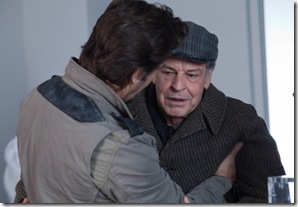 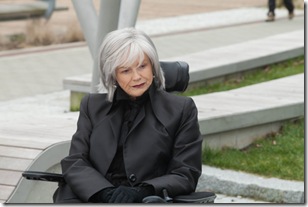 All you really need to know, beyond that, is that Letters of Transit is as twisted and out there as previous 19th episodes in the series’ run – and concludes with a revelation that counts as one of the most major in the show’s four season run, to date.

Haig and Cusick make effective partners – his experience tempers her enthusiasm – and they seem to have the kind of trust that we’ve seen between Peter and Olivia. Both are quick witted and capable of improvising when the situation demands [and it does demand!].

The script, by Akiva Goldsman and showrunners J.H. Wyman & Jeff Pinkner, posits a very scary potential future – the Observers, it is hinted, make most conquerors of the past look like beginners. As fans of the series will expect, it is of even more importance than usual to pay close attention to the proceedings – and that final sequence… Oh, my!

Unfortunately, I have no idea who directed Letters of Transit – the name was obscured by the superimposed notice that the ep is the property of/piracy will be punished yadda-yadda. Whoever it was, he did a terrific job of building tension, injecting judiciously calculated bursts of action, and finding exactly the right way to slip in important character moments.

This timeline is a darker timeline than we’ve seen so far, and that is reinforced by the unique credits that utilize blacks, grays and silvers to communicate the coldness of the Observer-run version of the future.

Although not as obviously as audacious as Fringe’s previous 19th episodes, Letters of Transit is as deeply disturbing and odd as any Fringe fan could ask for.