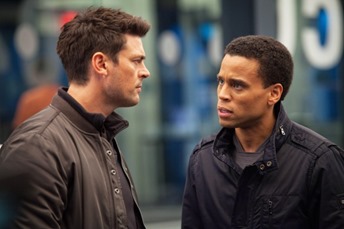 Fox’s Almost Human – a futuristic cop/buddy series featuring human and android detective partners played by Karl Urban and Michael Ealy – will be previewed in an extended first look during tonight’s much anticipated episode of Bones, The Woman in White, in which FBI Special Agent Booth Seeley and forensic anthropologist Temperance Brennan (finally) get married.

Step into the fun and futuristic world of ALMOST HUMAN with an extended first look at the upcoming series during the all-new “The Woman in White” episode of BONES airing tonight (8:00-9:00 PM ET/PT) on FOX. The exclusive first look will air at approximately 8:25 PM ET/PT. The adrenaline-fueled ride of ALMOST HUMAN begins when the thrilling drama premieres Monday, Nov. 4 (8:00-9:00 PM ET/PT) on FOX.

In the highly anticipated BONES episode, Bones (Emily Deschanel) and Booth (David Boreanaz) finally tie the knot, as the Jeffersonian team investigates a murder which threatens to distract the couple from their big day.

Executive-produced by Emmy Award winner J.J. Abrams (“Fringe,” “Lost,” the “Star Trek” and “Mission: Impossible” franchises) and creator J.H. Wyman (“Fringe”) and starring Karl Urban (“Star Trek”), Michael Ealy (“Sleeper Cell,” “Common Law”), Lili Taylor (“The Conjuring”), Minka Kelly (“Friday Night Lights”), Mackenzie Crook (“Pirates of the Caribbean” franchises) and Michael Irby (“Law Abiding Citizen”), ALMOST HUMAN takes place in the year 2048 – when being a cop has only become a more dangerous job than it is today. Following an unprecedented increase in the crime rate, every police officer must partner with an android. This series follows the week-to-week missions of JOHN KENNEX (Urban), a detective and sole survivor of a devastating police ambush, and his robot partner, DORIAN (Ealy), as this buddy-cop duo solves cases and fights to keep the lid on dangerously evolved criminals in this futuristic landscape.

ALMOST HUMAN is produced by Bonanza Productions Inc., in association with Bad Robot Productions and Warner Bros. Television. The series was created by J.H. Wyman, who wrote the pilot. The series is executive-produced by J.J. Abrams, Wyman and Bryan Burk. Kathy Lingg (“Person of Interest,” “Revolution,” “Fringe”) and Reid Shane (“Fringe”) are co-executive producers. Brad Anderson (“Fringe,” “The Killing”) directed and served as co-executive producer on the pilot.

Photo by Liane Hentscher/Courtesy of Fox