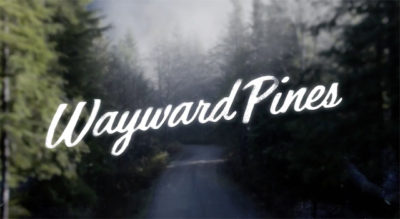 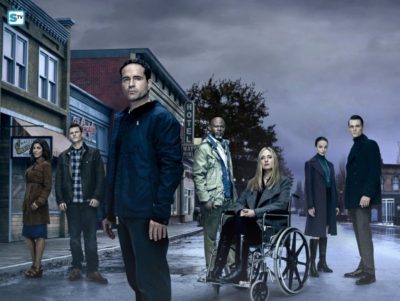 A few months ago during Wonder Con prior to the season 2 premiere of Wayward Pines, I had a chance to chat with the cast and crew.  As executive producer M. Night Shyalaman had hinted, “season 2 will be about the abbys” this time round along with introduction of new cast members.  With the majority of the book series shown in season 1, there was more leeway to play around with plot lines in season 2.  He stated they did have the dream cast this season.  Djimon Hounsou talked about his character being a key person monitoring Wayward Pines and his excitement in being a part of this series.  Jason Patric talked about the great opportunity of returning to acting playing the role of Dr. Yedlin. 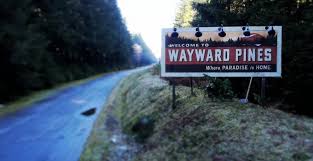 Armed with this new information and another dream cast, I looked forward to season 2’s premiere on May 25 on Fox.  When we last left Wayward Pines in season 1, the lead character Ethan Burke played by Matt Dillon sacrificed himself to save the Wayward Pines residents.  Mad scientist Dr. Jenkins (Toby Jones) is dead after being killed by his sister nurse Pam (Melissa Leo).  Ding dong, the wicked warlock is dead and all is good right? Of course things can’t always come easy in this town nestled in the hills. 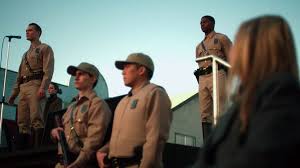 At the beginning of season 2, time had passed and there was a new leader.  From the frying pan into the fryer, it appears Wayward Pines is no better now than it was with the power hungry dictator, Jason Higgins (Tom Stevens).  With misguided ideals of “helping the people” through violent tactics, this opened the door for another hero to take place by way of surgeon Dr. Theo Yedlin played by Jason Patric.   Just like Ethan, he was brought into Wayward Pines against his will.  But this time, there is no doubt that he was in a futuristic age where instead of spaceships and space travel, the future had actually stepped backwards with only a small group of people left to continue the human race.  Teacher Megan Fisher (Hope Davis) is now a paraplegic after an accident in season 1 but continues to become more vicious and fanatical about her ideals about Wayward Pines.  She had the controversial ideal of the younger members of Wayward Pines needing to commit reproducing the species.  She also saw the Abbys as mere animals, which eventually led to her demise by one of those “animals”.  With that as a role model for leader Jason, it is no wonder things weren’t going so well.

Quiet CJ Mitchum (Djimon Hounsou) is introduced as the person who helps Dr. Jenkins with the pods & prolonged hibernation of the chosen ones.  Between being plagued with ghosts of his pasts and his hesitation on Dr. Jenkin’s crazy plan, he continues to obey commands.  As Dr. Yedlin wakes up in a world inhabited by scary creatures known as abbys instead of his beach vacation paradise, he discovers the twisted and violent existence of Wayward Pines.  He also sees a stranger in his wife Rebecca (Nimrat Kaur) with a past he was never aware of. 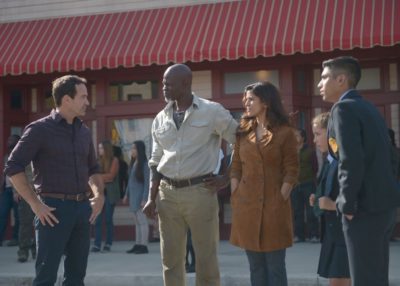 Abbys are starting to get stronger around the perimeters of the wall. Unlike season 1 where it seemed like abbys were just non-thinking creatures, it appeared there was more to them than meets the eyes. When a female abby is captured, she seems to be different from the others. Dr. Yedlin attempted to treat her with a sense of dignity, but those efforts were thwarted by Megan Fisher (who later got killed by the very abby she stuck a large needle in) and Jason’s random killing of three other captured abbys. It is discovered that the female abby is actually the leader of all the abbys.  Don’t kidnap the queen bee!  She eventually escapes after memorizing the password code of the lock to her cage, and runs to the arms of her adoring subjects outside the city walls.  Thanks to the hospitality of Jason and Megan, she gathers up the several thousand abby minions for an attack upon Wayward Pines. 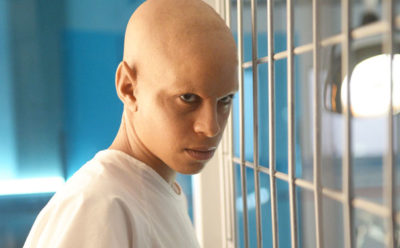 With only a limited amount of pods available, the people were divided between the saved and forsaken group.  Families were torn apart.  Fathers from children.  Wives from husbands.  As tensions continued to rise, Jason dies, apparently shot by his girlfriend (who turned out to be his mother thanks to time twists) and “accidentally” dies on the surgical table with Dr. Yeldin.  As the demise of Wayward Pines is eminent, it almost looks like Dr. Yeldin is going to pull another Ethan Burke act of heroism by injecting himself with diseases so the abbys will get a dose of disease when they devour him.  Instead, Jack’s girlfriend/mother Kerry Campbell (Kacey Rohl) has already injected herself and will sacrifice herself for the greater good.  As Dr. Yeldin places himself in the pod reserved for Kerry, and the lucky chosen ones slowly allow themselves to be covered in grey sand for the next several millenia as the remaining humans after left to be breakfast for the abbys, CJ has a fleeting moment of ending all human life in this world of never-ending devastation before realizing perhaps humans should have a chance after all.  With that, the pods are closed, and we are left to wait for another season. 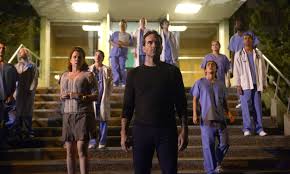 I personally loved the season finale.  Just like watching Game Of Thrones, you never know when a main character will be killed off such as the rest of Ethan Burke’s family, or nurse Pam, but then it wouldn’t be an M. Night Shyalaman show without the unexpected, right?  Another twist was the fact that Dr. Yeldin was spared at the last minute.  Of course, there are the things that need to be answered.  For example, whatever happened to the one human, Adam Hassler (Tim Griffin) who was allowed to roam freely among the abbies after he saved the life of their leader?  If the humans wake up, will they still have to deal with an angry man-eating abby species or will the abbys advanced over the next time?  And finally, the baby at the end.  Where did it come from?  Was it the later infertile Kerry’s baby, the baby of a human survivor from a presumed abby attack, or a more advanced form of abby baby?  If we don’t get a season 3, we will never know.

As Djimon Hounsou said: “Welcome to the roller coaster you never get off. And at every twist and every corner, there is a twist.  A new twist.  That is Wayward Pines.”

You can catch full episodes of Wayward pines season 2 at  http://www.fox.com/wayward-pines/full-episodes