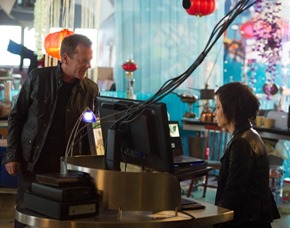 On Saturday, May 3rd, Fox will present a special behind-the-scenes look at its upcoming event series, 24: Live Another Day. The half-hour special will feature interviews with the series’ director, producers and stars – as well as premiere a look at the action, cast and production on location in London.

24: Live Another Day debuts with a two-hour premiere on Monday, May 5th (8/7C), before shifting to its regular timeslot on Monday May 12th (9/8C). Encore presentations of the series will run on subsequent Fridays (8/7C). For more, check out the press release after the jump.

A SPECIAL BEHIND-THE-SCENES PREVIEW OF “24: LIVE ANOTHER DAY” AIRS SATURDAY, MAY 3, ON FOX

As the clock ticks toward the anticipated premiere of 24: LIVE ANOTHER DAY, a special half-hour behind-the-scenes preview of the event series, 24: LIVE ANOTHER DAY: JACK IS BACK, will air Saturday, May 3 (8:30-9:00 PM ET/PT) on FOX. Featuring interviews with the series’ Emmy Award-winning director, producers and series stars, the special takes a behind-the-scenes look at the action, cast and production on location in London.

24: LIVE ANOTHER DAY is a production of Teakwood Lane Productions in association with 20th Century Fox Television and Imagine Television. Howard Gordon, Evan Katz, Manny Coto, David Fury, Robert Cochran, Brian Grazer, Jon Cassar and Kiefer Sutherland are executive producers. The original series, which had its last American broadcast on May 24, 2010, was created by Joel Surnow and Cochran. “Like” 24: LIVE ANOTHER DAY on Facebook at facebook.com/24. Follow the series on Twitter @24FOX and join the discussion using #JackIsBack.

Photo by Christopher Raphael/Courtesy of Fox