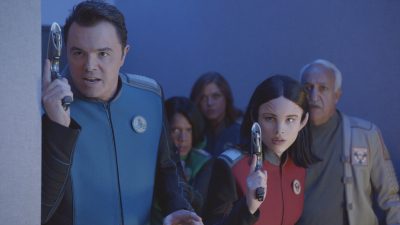 FOX has tweaked its Fall 2017 schedule a wee bit – moving the season four premiere of Gotham and the time period premiere of The Orville up a week to Thursday, September 21st.

THE ORVILLE Debuts with Two-Night Premiere Event Sunday, Sept. 10 and Sunday, Sept. 17, Immediately Following NFL ON FOX Doubleheaders and THE O.T., LIVE to All Time Zones

Season Four of GOTHAM will witness the emergence of the criminal landscape for which Gotham City is best known, with JIM GORDON (Ben McKenzie) and HARVEY BULLOCK (Donal Logue) at the forefront of the fight against the most depraved and unhinged villains. While Gotham City fights for normalcy, a new hero will rise, as BRUCE WAYNE (David Mazouz) begins to assume responsibility for the city’s well-being.

GOTHAM is based upon the characters from DC Comics and is produced by Warner Bros. Television. Executive producer Bruno Heller wrote the pilot, which was directed and executive-produced by Emmy Award nominee Danny Cannon. John Stephens serves as an executive producer and showrunner on the series. “Like” GOTHAM on Facebook at facebook.com/GOTHAMonFOX. Follow the series on Twitter @Gotham and join the discussion using #gotham. See photos and videos on Instagram at @GOTHAMonFOX.

From Emmy Award-winning executive producer and creator Seth MacFarlane (FAMILY GUY, “Ted”) THE ORVILLE is a live-action, one-hour space adventure series set 400 years in the future that follows the exploits of The U.S.S. Orville, a mid-level exploratory spaceship. Its crew, both human and alien, face the wonders and dangers of outer space, while also dealing with the problems of everyday life.